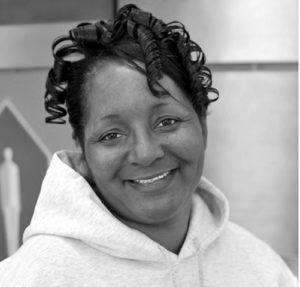 Vanessa Luellen’s neighborhood was being taken over by drug dealers, vandals and prostitutes. Vanessa experienced that and knew someone had to do something about it.

Vanessa knows the troubles on the streets well – she has had two sons in prison, one for murder. She was raised right, but she says, “I was a hard-headed child. I had the best parents. My parents prayed for me and told me right from wrong. But when I got grown, I chose the path I went down. I lived the street life.” In 1992, she herself briefly served time on drug-related charges. The day before her arrest, she prayed to God for help. Of her time in jail she says, “It gave me time to get my life together. That’s where God spoke to me and let me know it was time to get it right.” She has stayed clean ever since.

In 1999, she bought her current home on Pope Street in the Mitchell Heights neighborhood. Originally valued at $55,000, the home’s value dropped to considerably. As property values were declining, so was the neighborhood. Property owners lost their homes and those homes became the property of absentee landlords and the county and city. Grass grew up and trash marred the neighborhood.

As unemployment rose, there were an increasing number of young men out of work and out on the streets with nothing productive to do. There was more drinking, more drugs, more fights. And you couldn’t sleep for the gunfire. In December 2004, her cousin was staying with her, trying to get his life back together. He was shot near her home because of an argument that took place months earlier and he died before she could get there. It was this violent death that lead her to start walking the streets of Mitchell Heights, meeting neighbors and talking about their mutual concerns. Vanessa Luellen made sense and the neighbors listened.

She revived the old Mitchell Heights Neighborhood Association. She has spoken to mayors and City Council meetings and code enforcement and police officials. She photographs vacant buildings and pushes for repairs by absent owners. She recalls a meeting with Mayor Wharton, who walked through the neighborhood with her despite the rain. She’s very persuasive and that very day, crews were there to cut the grass and bushes on the vacant lots. In 2009, she organized a Christmas parade, a first in the area’s history.

And most telling of all perhaps — the Perfect Grocery, where alcohol and cigarettes were sold to minors and drugs were available to anyone with the money, was closed down by law officials. It reopened as All Good Grocery with new owners who marched in the parade and joined the association. Those owners are still trying to do the right thing.

There are still young men out there looking for work and with little to do, but now they know her. She says 75% of them want to work but can’t find jobs because of their records, which Vanessa says is a problem. She treats them with respect and when she sees them engaging in inappropriate behavior, she’ll tell them “you gotta move that on down.” She provides encouragement and hope for the future.

The challenges and the work continue. Now Mitchell Heights is joining with Brinkley Heights, Highland Heights, Grahamwood Heights and several other groups. The new Corner of the Heights hopes that together they can move all of their neighborhoods forward. It may take a long time and a whole lot of work, but Vanessa Luellen believes that effort and consistency will make it happen. She says, “It’s a struggle, but Glory Be to God.”

Vanessa Luellen’s courage has allowed her to confront the negative forces at work in her neighborhood, forces that have the potential to be vicious when their terrain is policed. Her willingness to offer leadership, to work vigorously with law enforcement and political leaders, shows a strong spirit, true grit, an ability to use her own bad choices to rebuild her community. Vanessa’s work earns recognition by Women of Achievement.

In 2018, Governor Bill Haslam granted Luellen a pardon for her 1984 conviction of fraudulent breach of trust and her 1992 conviction of facilitating the sale of a controlled substance for her exceptional positive contributions to her community.