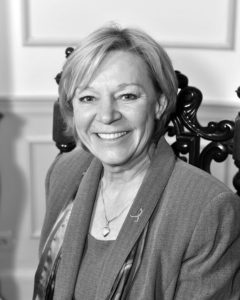 From big deputies in rural Mississippi to big security guards in Wal-Mart parking lots and gunfire on picket lines, Teri Craven has repeatedly faced big opposition in her years as a union organizer and political action director for the United Food and Commercial Workers Union Local 1529.

She has sweated and spent some sleepless nights – and smoked some packs of cigarettes – but she has not quit, she has not backed down and she has never lost courage for the job of getting America’s working people the rights they are due.

Teri grew up in a union house. Her father was longtime president of UFCW Local 1529, representing workers in Mississippi, West Tennessee and east Arkansas. Teri heard his stories of the fights and the arguments and the abuses and the needs of the people – all people.

She started her union career as secretary for the local in 1980 while earning an associate’s degree in business and raising a young son. She grew to love the work.

Two years later she joined the union’s staff, representing workers at 18 Kroger groceries in Mississippi. In 1990 she was dispatched to Indianola, MS, where she ended up in a three-month strike at Delta Pride’s catfish processing plant, facing bullet fire on the picket line and community pressure to force workers back to the plant. Workers stood firm.

Craven later took on the Wake-Up Wal-Mart campaign, battling the giant retailer for its abuse of worker hours and pay. She joined the Living Wage coalition in Memphis and rallied union support for the votes in City Hall and County Commission to secure improved wages for local government employees and contractors.

Still a regular work week could find her on a lonely back road in Mississippi, headed north after a political campaign meeting, being pulled over by deputies who know her car and want to harass her, being put into their back seat for a while, just because they know her work and because they can.

Teri Craven has courageously stood up for and stood with ordinary working people in the fight for just wages, safe working conditions and decent hours – things that too many employers still notoriously try to avoid and will go to great lengths to dodge.

She loves the cause and loves the work, but she laughs at herself because sometimes, on a plane, asked what she does, she answers, “’I’m a housewife.’ You see, sometimes, when you bring up unions, people get ugly!”

Teri has championed the cause of workers, especially women, whose labor is often forgotten, whether they work as a nursing home aide or on a catfish farm. She also campaigns tirelessly in electoral campaigns for candidates she believes are the best voice for working people, even in parts of Mississippi and Tennessee where the likelihood of success was not always great.

Beyond her courage, perhaps her greatest trait is that, even if a cause does not seem to have a great chance of success at the outset, this does not stop her from organizing with all her energy if she believes it could improve conditions for workers.

For her career of courageous service, we honor Teri Craven with the 2010 Women of Achievement Courage award.