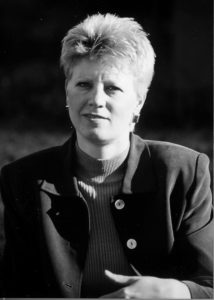 An attorney in private practice for more than 13 years, Susan Mackenzie is an out lesbian who has worked both within the justice system and outside the system as a political activist to change legal and social structures that deny the rights of lesbian and gay citizens.

Susan has merged her legal skills with activism, working for equal rights for women, lesbians, gay men as well as others victimized, deprived and overlooked by society.

Susan is often called on as a spokesperson for a feminist perspective on numerous issues.

She has never shied away from disclosing personal aspects of her life in order to further the political rights of women. She has spoken out as a survivor of child sexual abuse and has never hidden the fact that she is a lesbian.

She is a survivor in all its senses.

Born in Ann Arbor, Michigan, while her dad was in graduate school, she grew up in Huntsville, Alabama. She graduated from Middle Tennessee State University in 1983 with a double major in psychology and criminal justice administration. She earned her law degree from Memphis State University Law School in 1986.

Susan has successfully represented lesbian and gay parents being denied their parental rights because of anti-gay stereotypes. In another focus of her practice, Susan assists gay and lesbian couples in protecting their relationships through wills, powers of attorney and co-parenting agreements – legal documents that are unnecessary for those allowed to marry.

She was a member of the team of attorneys that represented the plaintiffs in the successful challenges to the constitutionality of the Tennessee sodomy statue which criminalized private homosexual activity between consenting adults. This law was declared unconstitutional in 1996.

Susan brings her feminist philosophy to litigation as a Rule 31 certified mediator. She is a former national board member for both the National Organization for Women and the National Lesbian and Gay Law Association.

Susan’s courage is reflected in her daily struggles for equality whether in the courtroom or on the streets. In the face of opposing forces, even those whose anger is disruptive and violent, she is able to maintain her voice of reason.

Susan Mackenzie continues to work as a litigator in Memphis.