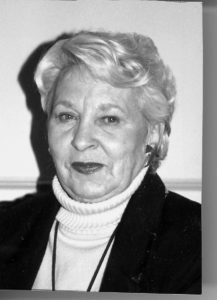 Although some form of mental illness affects one in five families, the condition is often misunderstood, feared, and hidden from public view. It takes a person of courage to accept the unpopular challenge of being a champion for people who suffer with mental illness. Such a courageous person is Helen Adamo.

For 20 years, Helen has worked to dispel erroneous myths, change public policy, and defend the rights of individuals whose lives have been affected by disorders of the brain. Her business card from the National Alliance for the Mentally Ill of Memphis reads, “Helen Adamo, Advocate.” Behind this simple title lies a diverse, complex combination of hard-fought achievements, gratifying victories, frustrating delays, fierce battles, exhausting hours, and eternal faith. Helen’s goals include removing the stigma attached to mental illness and improving the quality of life for those who often are victimized because of their illness.

“Discovering that a family member has a mental illness is like a death, but the person is still living,” Helen said. “You don’t receive flowers. People don’t come to visit and console you. But you still grieve. And you have to go through each step of the grieving process until you reach acceptance. That’s when you become an advocate.”

Helen has far more than a passing acquaintance with those steps to acceptance. She is the mother of a mentally ill adult son. Twenty-eight years ago when she first faced the heartbreak of mental illness, there were few medications and even fewer services available for families with mentally ill members.

Today, she enthusiastically lists the number of medications available, but laments the delivery of services and the ignorance that persists about the disease. She edits the AMI Advisor, a newsletter for the organization she has served since 1983.

By speaking out in defense of the rights of the mentally ill, Helen draws attention to the plight of these intelligent individuals who suffer and may not know that there is help for them. She is one of the cofounders of the Crisis Intervention Team, specially trained police officers equipped to handle people with brain disorders. This special unit has been in existence for 11 years and has become a model for the rest of the country. The officers volunteer for the training and are now found in every precinct in Memphis 24 hours a day.

Jails are another challenge faced by the mentally ill and a major concern for Helen. She firmly believes that if a third of detainees in jails who are suffering with serious brain disorders were expedited through the system so they could get the help they need, overcrowding in jails would be a moot point. This is neither a popular nor easy proposal, but one she pursues nevertheless. After two years of Helen’s advocacy for those mired in the judicial system, a committee has been formed to review solutions to the problems – a glimmer of hope on the horizon for her.

Helen Adamo continues to work to improve police encounters with those afflicted with mental illness.