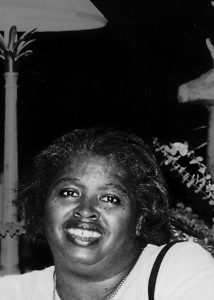 Doris Bradshaw stood up against powerful forces to protect her community.

Doris serves as the executive director of the Defense Depot of Memphis, Tennessee – Concerned Citizens’ Committee which was formed during a PTA meeting in October 1995, to address the pollution the Defense Depot was causing in the black residential community surrounding it. She became known as “troublemaker” when she began researching the issues connecting pollution and cancer which contributed to her grandmother’s death. She discovered scores of chemicals flowed throughout the Depot’s 18 drainage ditches into the surrounding community, which included eight schools.

Doris’ efforts have resulted in many achievements for the community. When health department statistics showed the cancer rate in her community was twice as high as the country as a whole, she challenged plans to “pump and treat” contaminated water beneath the depot because it was insufficient and not scientifically well-founded. She demanded that the Agency for Toxic Substance & Disease Registry perform another health assessment on the community surrounding the Defense Depot. The assessment proved that the one done in 1995 was unscientific. Later, she created and chaired the community board of the Agency for Toxic Substance & Disease Registry. She searched for an outside lab to test samples of the water in Memphis and identify contaminants.

Doris is also a community representative for the Community Tribal Subcommittee of the Board of Scientific Counselors, one of the nine people chosen from a field of 75 applicants.

In order to keep people informed about environmental racism, Doris travels extensively and has become a familiar figure in this movement. She has been appointed to and chairs the Tennessee African-American Environmental Justice Action Network and she is a member of the Tennessee Minority Health Coalition.

A member of the National Organization for Women, she conducted a workshop at their 1997 annual conference titled, “A River of Pollution Runs Through It: Women Fighting Environmental Racism in the South.”

Doris Bradshaw continues to combat environmental justice in her own backyard (literally). Her daughter has also joined the fight.