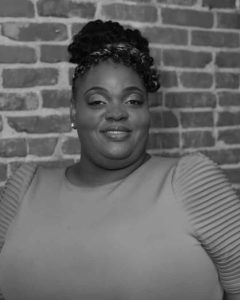 Born to a drug addicted mother, at the age of 12, Mildred dropped out of school to care for her twin siblings who had been abandoned. They had not yet reached their first birthday. In 2000 Mildred Richard-Edwards found out she was HIV+ after she gave birth to her son, due to a pregnancy that was a result of rape.

Mildred was overwhelmed. She felt alone, ashamed and unworthy of love. She would accept help from no one, not even her best friend.

She was referred to Hope House. There she met staff members Maria Randall and Melissa White. For the first time she met other women like herself. There she learned how to live with HIV and she earned her GED. She says the support she received was phenomenal.

Hope House was having a Hopes and Dreams luncheon to raise funds for a new space.

Maria asked her to speak but she said no. Maria told her it would only be a few people. She still said no. But finally she agreed.

When she got to the University Holiday Inn, the room was packed. She was terrified but Maria convinced her she could do it and stood by her side as she spoke. She cried as she talked and so did many of those listening. She won a standing ovation and was then hugged by lots of strangers. She’d thought that since becoming HIV+ she couldn’t be touched by others. The experience was life-changing and she’s been speaking about living with HIV ever since.

Her mother didn’t love her. After her diagnosis she became estranged from her father. She believed that she didn’t deserve love. Yet for one year, the man who became her husband left roses on her doorstep every morning. She was living with a mentally ill aunt and 4 children and on their first date he took her and all the kids. They married in 2003 and he has supported her in her work ever since.

Mildred is a tireless advocate on behalf of people living with HIV, counseling them through Hope House and Friends for Life. She has been a peer mentor, patient navigator and case manager, often taking calls herself in the middle of the night. Though no longer working for those groups, she is still part of the family. And her clients are still with her. “You don’t leave someone who is living with HIV,” she says.

Mildred received the annual National Public Citizen of the Year Award in 2016 from the National Association of Social Workers for her outstanding work advocating on behalf of people living with HIV/AIDS. She continually pushes for better care for people living with the disease and shows them they can live full lives.

Mildred is founder of “My Sista’s Keeper,” which started as a small group for women living with HIV or caring for someone who is living with HIV. The group has now grown to over 80 women who meet monthly. Some are HIV+ and some are not but they all share problems and concerns. She provides a meal. Mildred describes it as Girls Night Out with an edge.

Her siblings and son are grown. She now works for a pharmaceutical company, traveling to teach people how to live successfully and even happily with HIV. She continues to tell her story and in fact will be doing so at Vanderbilt this week.

A force of nature, Mildred Richard-Edwards courageously speaks out as a person living with HIV, despite societal stigma. We honor her courage which has transformed countless lives.