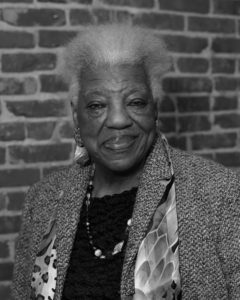 Born in 1936, Mary Mitchell has lived in the same home in Orange Mound since she was six years old. Today, Orange Mound has one of the higher levels of housing blight in Memphis. The unemployment rate has for some time remained above 20%. Some tidy homes and thriving small businesses have faded into boarded-up storefronts. Television and media too often present negative stories of poverty and violence.

Yet to Mary, Orange Mound is sacred ground. She determined that the rich historic and cultural heritage of Orange Mound deserved to be preserved and celebrated and she works to make this happen.

Orange Mound started in 1890 as one of the nations’s first planned African-American communities. It was a source of pride to the business owners, lawyers, teachers and other professionals who called it home. In 1919 it became part of Memphis.

The Orange Mound Mary Mitchell grew up in was thriving. During World War II her grandparents and neighbors strategically organized their limited resources. They worked together to ensure that neighborhood children were fed before heading to school. Children watched adults go to work every day, instilling a work ethic and making sure that every young person knew their value. The community had a vision and a purpose that Mary recognized as she matured.

At some point, as Mary watched, the neighborhood began a slow decline. Buildings closed, employment opportunities decreased, the beautiful neighborhood park shut down, and poverty and crime were on the rise.

Mary became a mother in her teens, raising five children, but she always planned to go to college. In 1980, at age 44, she enrolled at LeMoyne-Owen, graduating with a degree in Philosophy in 1984. She had always loved Orange Mound, but it was a project at LeMoyne-Owen that inspired her to start telling the story of her beloved community.

After graduation, she started a business but continued to promote the importance of Orange Mound at every opportunity.

From 2000 through 2005 she chaired the Orange Mound Collaborative. Funded by the Ford Foundation, the Collaborative stressed education through empowerment. Included were an Early Childhood Institute, an oral history project and a community newspaper. After grant funding ended Mary enlisted the help of the University of Memphis Journalism Department to continue the paper for several more years.

Unwilling to lose the momentum begun by the Collaboration, in 2006 she and several others founded the Melrose Center for Cultural Enrichment in Orange Mound. The group is committed to the preservation and restoration of the Historic Melrose School building which include a genealogy center as well as a museum.

According to her nominator, Mary promotes collaborations by uniting teams around historical, cultural and socioeconomic factors to advocate for the epic history of “The Mound.” She sees opportunity and progress even when faced with challenges. Mary sees the best in people and encourages those behind her to reach past the obstacles of today and be the bright spirits of the future. Thanks, in part to the extraordinary determination of Mary Mitchell, the history of Orange Mound has been documented through newspaper articles, tours, speaking engagements and documentaries.

Mary E. Mitchell, Shelby County’s Honorary Orange Mound Historian, is determined not to make lemonade out of lemons but to make orange juice out of oranges.