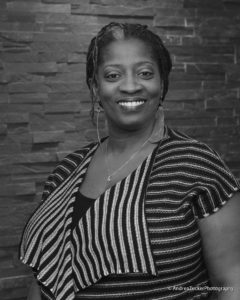 Singing the lead in a national touring company production.

Home to Chicago and to an abortion clinic.

Only it wasn’t. It was a crisis pregnancy clinic where Cherisse Scott was convinced to stay pregnant and sent home with a onesie. She went back to her pre-musical job as a paralegal, delivered her son and seven months later was unemployed, on food stamps and getting nothing from the crisis clinic to sustain the life, health and well-being of her child.

For six years, and through three pregnancies that were terminated by abortion, Cherisse worked temp jobs and performing gigs. She says, “I didn’t understand my body. I had no information. After the third time, I ran into a reproductive justice advocate who finally taught me how to understand my fertility.”

The power of understanding her body – fertility, pregnancy and how to prevent it – made her passionate about sex education. She knows full well how life changes positively when a woman is empowered with access and information about her reproductive and sexual health.

She began volunteering with her new friend’s group – Black Women for Reproductive Justice – and soon joined the board and then the staff.

In 2011 Cherisse moved to Memphis where her mother lives and where she had spent part of her childhood. Her mother saw the need for what Cherisse was doing in Chicago to be black-woman led on behalf of black women, Cherisse says.

With her mother and grandmother as honorary co-founders, she launched SisterReach, a nonprofit whose mission is focused on empowering women and girls of color through a broad interpretation of reproductive justice.

SisterReach defines reproductive justice as “the complete physical, mental, spiritual, political, economic and social well-being of women and girls, and will be achieved when women and girls have the economic, social and political power and resources to make healthy decisions about our bodies, sexuality and reproduction for ourselves, our families and our communities in all areas of our lives.”

Women in higher poverty areas are at greater risk of unwanted pregnancy, dropping out of school and other things related to sexual health so SisterReach strives to guide women and girls to resources for pap smears, emergency contraception, testing and treatment.

Cherisse and SisterReach produced a 2015 report on the need for comprehensive sexuality education for Southern youth of color; opposed anti-abortion billboards in Memphis targeting black men, trained clergy and faith leaders on social justice issues; and presented to the United Nations Working Group on the Issue of Discrimination against Women in Law and Practice on the impact of fetal assault legislation on Tennessee women. SisterReach’s work and state and national partners led to defeat of the fetal assault bill which in 2016 criminalized women struggling with drug addiction.

Cherisse is a 2016 Rockwood Institute Fellow, Reproductive Justice and Faith Fellow with the Center for American Progress and has been featured in New York magazine, O magazine, NBC News #31DaysofFeminism Campaign and Full Frontal with Samantha Bee. A recent push for meetings in Washington are aimed at talking to decision-makers about the kind of support black women need.

And on top of all that, Cherisse has returned to her music, singing jazz/soul/R&B fusion. She will release a third album this year and wants to create a one-woman show that incorporates her social justice passion and her music.

In a social and political atmosphere which scapegoats and stereotypes young women of color for their sexuality, Cherisse instead teaches, supports and advocates for them in claiming control over their bodies and their reproductive decisions.

“I’m a bisexual black woman who is also a Christian and a minister,’ Cherisse says. “I hope SisterReach is a space for black and brown women to feel community.”