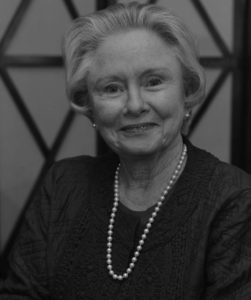 Judy Wimmer has long had the vision of a peaceful and loving community free of prejudice and with respect for all. This vision has led her to bring her creative and enlightened leadership to many projects and initiatives designed to improve the lives of women and children in Memphis and Shelby County.

Judy has always been very sensitive. Even the nuns at school told her so. She’s always been an activist, ever willing to take on a new challenge. She began taking dance classes at age 3 and started her own dance school right after high school, teaching ballet, tap and jazz in her own studio in Whitehaven while attending college. She only became a stay-at-home mom with the birth of Dana. But even then she didn’t stay home.

In the spring of 1968, Judy participated in the first Rearing Children of Good Will Workshop, a program that brought black and white mothers together to hear speakers on civil rights, child development and community needs and then to promote dialog across racial lines. Inspired by the experience, that summer she organized a second workshop in the Whitehaven community.

That same year, she became a founding member of the Memphis Panel of American Women, organized locally by Jocelyn Wurzburg. This group brought together ethnically and religiously diverse women to speak at service organizations, schools, etc. about their personal experiences with exclusion and discrimination.

In 1969 she chaired the Public Affairs committee of the Concerned Women of Memphis and Shelby County. Their primary goal was to help AFSCME avoid another sanitation workers’ strike.

Being a family who talked the talk and walked the walk, Judy, her husband Fred, and their three children purposefully moved to the integrated Vollintine-Evergreen community. The children were then enrolled in public schools, much to the dismay of the grandparents.

She next became one of the key organizers and volunteers of IMPACT (Involved Memphis Parents Assisting Children and Teachers), a group that supported the court-ordered public school busing which took place in 1972. She often ran the office and served as the group’s spokeswoman. Once busing began she organized volunteers at every bus stop to insure a peaceful process. J. Mac Holladay, director of IMPACT, recalls that “her dedication to public education and to the future of the City of Memphis was a shining light in a time of crisis.”

Continuing to pursue her vision for women, from 1974-1976 Judy was a VISTA volunteer, working at MIFA as co-director of Mother to Mother, a program that paired church volunteers and mothers on welfare to help them navigate the social service system. Pairing these mothers from different backgrounds had the additional impact of dispelling myths on both sides.

In 1981, the Memphis Public Library received a National Endowment for the Humanities’ Women in the Community grant administered through Radcliff College. A small committee planned a series of public programs called “Memphis Women: From Yellow Fever to 2001.” Judy was a member of the committee as well being a program chair.

Judy says that one of the best things that ever happened to her was returning to the University of Memphis to complete her degree. She says that Maya Angelou and Women of Achievement Heritage recipient Myra Dreifus are to blame. Judy had gone to hear Ms. Angelou speak and along with a few others went out on the lawn in the rain to continue the conversation. Myra was there, invited her to lunch, and after two hours of exchanging confidences, told Judy to go finish school. Undecided until that conversation, she did, completing her degree in 1982.

Of course Judy was there – on the planning committee – when Women of Achievement began in 1984. Our goal of recognizing the unheralded achievements of women is right up her alley.

In 1968 Judy wrote: “These are times of soul-searching throughout our community, our country, our world. As never before, concerned people are seeking ways to live in fellowship, harmony, understanding, and love with all persons everywhere.” These words still inform her vision.