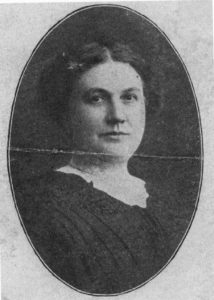 Susanne Coulan Scruggs could have easily filled her days and social calendar with teas and luncheons and the activities of her six children and her husband, a prominent Shelby County attorney and judge.

Instead, Susanne devoted much of her adult life to improving conditions for many of the least fortunate in her adopted city of Memphis. Born in Boston, she moved to Memphis in 1889 after marrying attorney Thomas M. Scruggs. In the next 50 years, she would lead endeavors to provide safe places for children to play, improve public education, create a juvenile court, provide free medical care to needy children, and initiate family welfare programs.

A founding member of the Nineteenth Century Club, Susanne is credited with directing a fundraising reception that ensured the opening of the Cossitt Library in 1894. After that successful event, she began to focus her efforts on social programs to help Memphis children at a time when progressive leaders across the country were tackling similar community issues. Memphis had the added complications of recovering from the Yellow Fever epidemic just two decades earlier.

Many of the groups and agencies organized through Susanne’s leadership are organizations we take for granted today. At the turn of the century, she was on the cutting edge. She was perhaps best known for founding the Memphis Playground Association in 1908 to ensure supervised playgrounds in Memphis parks. The organization creatively enlisted unruly boys to be part of a “Playground Police”, transforming disorder into self-government with the young men serving as protectors of younger children. The Playground Association became the most influential child welfare organization in the city. Its leaders were responsible for the creation of a children’s ward in the City Hospital and the establishment of a Juvenile Court.

In working to create the Juvenile Court, Susanne corresponded with Judge Benjamin Barr Lindsey of Denver, a national pioneer in the juvenile justice movement. Born in West Tennessee, Lindsey provided legal forms for the Memphis reformers to use in creating the Court and Detention Home. Susanne disagreed with a decision to make the Juvenile Court part of the city court system instead of the county probate courts, saying city court was an extension of the police department. As chairman of the Juvenile Court Advisory Board, she worked to make the best of the situation and fought for a larger budget. While the board did not receive all of its requests, Susanne stood firm on several issues including a female probation officer.

Susanne ultimately was dissatisfied with the Juvenile Court and resigned from the Advisory Board in protest. She founded the Children’s Protective Union, a complementary agency that found homes for children. Susanne argued that dependent children should not experience the Juvenile Court system because it was designed for delinquent children. In her work with the Union, she served as a “friendly visitor” to homes of children served by the agency.

In the first decade of 1900, Susanne organized two public school associations: the Woman’s Public Schools Association in 1905 and the Public Education Association in 1907. The Woman’s Public Schools Association focused on efficiency in education. They fought for free paper and books for needy children and less classroom crowding. In one letter to the Memphis School Board, Susanne made an argument still debated today. She contended that promotion to the next grade should be based on a child’s daily work instead of a single exam.

The second educational group, the Public Education Association, had a broader agenda in the schools. Through that group, Susanne led advocacy efforts for greater financial stability for the school system, improved sanitation in schools, medical exams for students and the serving of hot lunches. Both of the education associations focused on increasing parental involvement. Susanne was active in both state and city levels of the Congress of Mothers and Parent Teacher Associations and she urged women to participate as a way to make their voices heard until they earned the right to vote.

It should be noted that while Susanne worked for child-welfare reform during a time of segregation, she often supported Julia Hooks and other African-American reformers in their parallel efforts.Susanne looked beyond specific issues to address the broader social context. In 1913, at the statewide meeting of the Congress of Mothers and Parent Teacher Associations, she made a motion asking the organization president to name a committee to draft a series of bills to be introduced in the General Assembly. Among the 11 proposals were: