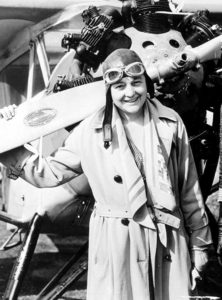 Phoebe Fairgrave Omlie was a contemporary of more famous women fliers like Amelia Earhart and Pancho Barnes. She began her career in the early barnstorming days, walking wings and parachute jumping in her own flying circus. After she and her pilot, Vernon Omlie, landed in Memphis stranded and broke in 1922, they married and together established the first airport in the Mid-South and one of the first flying schools in the country.

Throughout her long career, Phoebe collected a string of “firsts” for women aviators. The recipient of the first Transport Pilot’s License and Airplane Mechanic’s License issued to a woman, Phoebe Omlie set a number of speed, endurance and altitude records. As an air racer, she won a number of high profile races, including the First National Women’s Air Derby in 1929 and the Transcontinental Handicap Sweepstakes in 1931.

In 1932, at the invitation of Eleanor Roosevelt, Omlie logged over 20,000 miles for FDR’s presidential campaign. After the election, President Roosevelt made her Special Assistant for Air Intelligence of the National Advisory Committee for Aeronautics (the predecessor of NASA), the first woman government official in aviation. Until she left government service in 1952, Phoebe Omlie was a central participant in the efforts to regularize and bureaucratize civil aviation, to make it safer and more affordable for the average citizen. Further, she used her access to government and the media to tirelessly promote women’s active involvement in aviation.

Though she came to a tragic end, dying alone in a transient’s hotel in Indianapolis at the age of 73, the victim of lung cancer and poverty, a few enthusiasts remembered her and proposed naming the control tower at Memphis International Airport for her in the 1980s. Due to a series of mishaps, the facility was never formally dedicated. This will be corrected when the new control tower is completed in 2011.

Phoebe Omlie’s place in the pages of aviation history is unchallenged. A woman of daring, courage, intelligence and devotion to the “air age,” she ranks as one of the greatest participants in 20th century American progress.

In October 2011, both the old and new air traffic control towers at Memphis International Airport were named for Phoebe Fairgrave Omlie in a ceremony featuring members of Congress and other officials.