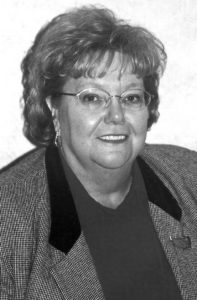 Janann Sherman didn’t start out to be a historian. After high school she married Charlie Sherman and they both worked as electronics technicians in an Arizona Motorola factory. Ten years later, as a side effect from some medication, Charlie lost his eyesight. Moving to Arkansas, Janann started community college at age 35 on Charlie’s G.I. bill. After finishing her degree in history and psychology at the School of the Ozarks, Janann was awarded a full five-year fellowship to Rutgers University to pursue a master’s degree and then a doctorate in history based on a senior thesis written about Lady Bird Johnson. “The program was very difficult, but I was too stubborn to quit. I had discovered women’s history, discovered my history. I got excited and, consciously or unconsciously, made it my mission to share their history with women.”

Her mentor at Rutgers suggested she investigate Margaret Chase Smith who served in Congress for 33 years, 24 of those in the U.S. Senate. Most of her time as senator, Smith was the only woman. She left office in 1973, but kept all of her private papers and limited access to them. After winning Smith’s trust, Janann spent six years in conversation with her, gathering information that would become her doctoral dissertation in 1993. The entire work, No Place for a Woman: A Life of Senator Margaret Chase Smith, was highly praised by The New York Times Book Review in February 2000. Janann said, “Margaret didn’t live to see it, but she knew her story would be told and her place in history assured.”

In 1994, the year she turned 50, Janann accepted the position of Assistant Professor of History at the University of Memphis. Then she met Carol Lynn Yellin and Paula Casey. Her collaboration with Carol Lynn became The Perfect 36: Tennessee Delivers Woman Suffrage. And thanks to Paula Casey’s fund-raising, this book has been given to every school and library in Tennessee.

Janann is currently working on an anthology about Betty Friedan, the mother of modern feminism. At the University, she is team-teaching a course with Dr. Beverly Bond called “Parallel Lives: Black and White Women in American History.” Sherman and Bond plan to produce a textbook so the course can be taught in other schools. Janann has also begun work on the story of Phoebe Omlie, an aviator who owned an air circus, won the first transcontinental race for her airplane class in 1929, and, with her husband, opened the first airport north of Memphis.

Dr. Janann Sherman is soon to be an Associate Professor of History at the University of Memphis. Her community involvement includes board membership with Memphis Heritage, Inc., serving the Memphis historical community; coordinating Tennessee History Day, an enrichment program for students in grades 6 through 12; and as editor of Network’s monthly newsletter. Janann remarks on her commitment to women’s history, “I get so many of my personal needs met by telling these stories.”

In 2003, Janann and Beverly Bond published Memphis Black and White, a short history of the Bluff City.