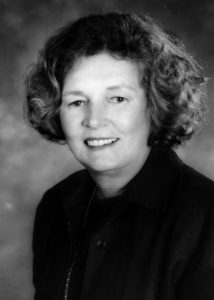 When she was a little girl, Nancy sometimes slept in her grandmother’s artist studio in the Tampa Bay area of Florida. The other essential figure in her life, her mother, was deeply involved in the local political scene. This combination, the artist’s creative internal life and the necessarily social life of politics, has defined Nancy’s career. She is known for her sharp intelligence, political toughness, creativity and razor-sharp wit.

Nancy earned a master’s degree in education from the University of Florida in Gainesville and taught briefly in Pensacola. But then she changed her life. She sold her house and everything in it to pay for law school at Florida State. She got a job as a legislative intern, writing legislation for the House Education Committee to pay the bills. With her law degree in hand, she moved to Memphis in 1974 to join her husband, Richard, a pioneer pilot with Federal Express. She looked for work for a year but, as she says, “there weren’t a lot of women lawyers then.” When she was hired as the first female public defender in City Court, newspaper and television covered the moment. A year later, she was chief public defender.

In 1977, she and two previous Women of Achievement honorees, Veronica Coleman-Davis and Karen Williams, formed the first all-female, biracial law firm in Tennessee. Also in 1977, Nancy was a “founding mother” of Network. Isolated in male-dominated workplaces across the city, she got women together “to share the experiences of being women working on equal professional levels with men.” Network was an oasis where stories, contacts and friendship could be shared. It grew to more than 200 members by the mid-1980s, and continues to be a place where professional women gather for support.

Nancy Sorak became the first woman to run for judge, and win, in Memphis history. While two others had been appointed, in 1967 and 1978, Nancy won her judgeship in a tough election, then won re-election four times and served 16 years in City Court Division 3.

In her art, Nancy explores the many aspects of the feminine, often turning traditionally domestic items and symbols into powerful feminist messages. In a rustic Mississippi coast studio, Nancy is pursuing what she calls her “drawn paintings.”

Sometimes with an unseen hand, but always with an unbending commitment to equity and opportunity, Nancy helped pave the way for women in law and politics in Memphis and Shelby County. Nancy Sorak’s vision opened pathways for other women and boosted the dreams and ambitions of many key leaders in our community today.