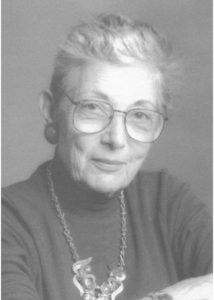 When Nancy Bogatin opened the Studio of Advertising and Art in 1956, women who worked were called “working girls.’’ Those in advertising were expected to be models, not managing partners in their own agencies. Doing the expected was not on Nancy’s “to do” list, then or ever.

For more than 50 years, as a business, civic and volunteer leader, Nancy has made changes across Memphis.

Nancy graduated from Central High School in 1943 and earned her journalism and advertising degree at University of Missouri in 1946. She worked briefly as a copywriter and program personality on WMPS radio in Memphis before big-city lights lured her to a job as promotion director, and later as sportswear buyer, for Sears, Roebuck & Co. in New York City, her hometown.

In 1952, after, she says, “visiting my mother once too often,’’ Nancy returned to Memphis to marry Irvin Bogatin. Although most wives in their circle did not work, Nancy “got a little job’’ as director of special promotions as Lowenstein’s opened for business. A year later, her first entrepreneurial venture opened, a women’s ready-to-wear specialty shop called Casuals, Memphis. She was its owner, merchandiser and operator for three years, until she and Martha ‘Ham’ Embree opened the Studio. Eventually, as Nancy says, “we had the best retail roster in town,’’ among them Seessel’s, James Davis, Haas and Catherine’s.

After 25 years, in 1981, she sold her interest in Studio of Advertising and Art and formed NEB, Inc. For a decade, she continued working as an advertising consultant for clients while also performing the same service for not-for-profit groups on a pro bono basis.

She was the first woman to hold top leadership posts in several Memphis organizations. She headed the boards at the Memphis Brooks Museum of Art, Goals for Memphis, Memphis Literacy Council and the Friends Foundation at Brooks Museum. Nancy was also vice president of the Memphis Arts Council board.

In recent years, despite a fight against cancer, Nancy has been an increasingly important leader in key education initiatives. She is especially devoted to Partners in Public Education, which she helped found. She has served as chair and continues to advocate and bolster the organization. She was a member of Mayor William Morris’ Task Force on Education, the Memphis Youth Initiative, the president’s councils at Rhodes and Christian Brothers University, the Governor’s Education Commission for Tennessee 2000 and was co-chair of Memphis 2000 education initiative.

She also is very involved in The Grant Center, whose mission is to strengthen non-profit organizations through education and support.

Nancy Bogatin’s consistent service, leadership, energy and creativity have made Memphis a more dynamic community. Even after a lifetime of achievement, and 12 years past her “retirement,’’ she continues to work steadfastly to give all Memphians a chance at a good future through a good education.