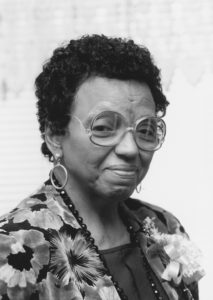 Mary Alice Hubbard McWilliams crafted successful citizens and executives in many fields during more than 50 years as a senior high school mathematics teacher and leader in her church and community.

Teachers, engineers, legal and medical professionals, and government officials name her as the singular key influence in their education and success. Among them are Mayor W. W. Herenton, former city school Supt. Johnnie B. Watson, City Councilman Joe Brown, school principal Cassandra Smith and Spelman College professor Dr. Gloria Wade Gayles. They called her “difficult’’ and “tough as nails.’’ She says, “I’m firm. It must be right … I don’t play school.’’

Herenton has said, “What I loved about her was Mrs. McWilliams stayed after class with me and some of the other students who had difficulties. She would take her planning period and keep working through her lunch hour. She worked after school. She really cared about us.’’

Mary Alice grew up in Memphis in a family of nine children. She earned her bachelor’s degree in mathematics at LeMoyne-Owen College and a master’s degree from the University of Illinois with post-graduate work at Memphis State College.

She began teaching at Magnolia School in 1950 but soon transferred to Booker T. Washington High School where she taught Herenton and former school board member Carl Johnson. In 1971, she was moved to Memphis Tech, but returned to Washington High at Herenton’s request in 1986 and retired from Carver High in 1999.

She is one of four generations of educators in her family. “I always loved working with children. I believed everybody could learn and deserved to be taught.’’ She was the first black woman elected president of the Memphis Education Association. It was during her term that teachers bought the building on Flicker and negotiated their first master contract with the city Board of Education.

She was a strong advocate, leader and spokesperson in the Civil Rights struggle. She was a member of Women on the Move for Equality and committees that dealt with discrimination and social equality.

At Second Congregational United Church of Christ and with the national denomination, she was at the forefront in the struggle to deal with racism and sexism. She served on numerous committees, boards and as panel moderator and spokesperson. She traveled extensively for the church as president of the UCC Black Women’s Caucus and as a member of the national UCC’s Task Force on Women in the Church and Society, and the Advisory Commission on Women. She was honored as an outstanding national leader.

Mary Alice Hubbard McWilliams held her students to rigorous standards and high expectations, boosting them toward achievement and success while working just as hard for change and progress in the larger community and her church.