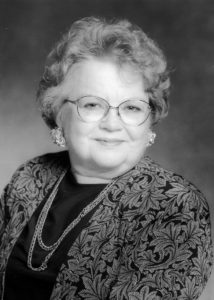 Fannie Belle Burnett has devoted her professional life to raising money for good causes – and raising the next generation of fundraisers.

When Fannie Belle became the fourth executive director of Girls Club of Memphis in 1964, her only work experience was as a volunteer church youth director and mother to her own four children. But she knew how to take charge. She had worked for an employment agency and rose to become regional manager for Tupperware. She later became the primary support to her children and shared her home with various cousins.

When she joined the Girls Club, the board had just purchased its first facility and assumed a mortgage of more than $30,000. That year’s audit funding was $11,000 and girls’ memberships totaled 100. During Fannie Belle’s 14-year stint, the agency paid off its mortgage, added two centers, diversified its clients and staff, produced girls who received national recognition and tackled serious issues of growing up female in our society.

Under her leadership, Girls Incorporated of Memphis earned a national reputation for program excellence in areas like sexuality, employment and discrimination. By the late 1970s, Girls Inc. of Memphis had a budget of more than $400,000 and served 3,000 young people in three centers. In 1978, Fannie Belle became the first National Director of Program Development for Girls Inc. Under her leadership, three program areas were developed – youth employment, juvenile justice, and family life education. In addition, she was a critical participant in planning and executing the first nationwide conference dedicated to exploring the needs of girls – The Wingspread Conference – “Today’s Girls, Tomorrow’s Women.” Since Fannie Belle had honed her skills in fundraising, especially grant writing, she led the team that secured the funding to build the Girls Incorporated National Resource Center in Indianapolis. Today this center serves as the hub of research, program development and training for Girls Inc.

In the 1980s, Fannie Belle returned to Memphis. She worked in development for Youth Service Memphis/USA, and then established the Support Center of Memphis to help foster nonprofits. She was cofounder of the Memphis Chapter of the National Society of Fund Raising Executives and helped raise millions of dollars for the Memphis Zoo, Memphis Theological Seminary and Memphis Botanic Garden. “She seems to have always been operating on two tracks,’’ her nominator said, “seeing to the needs of her organization and bringing along others in the field.’’ In 1992, she was named director of LeMoyne-Owen College’s capital campaign. Three years later she became interim vice president for investment and helped manage the school during a search for a new president.

Now retired, Fannie Belle volunteers her skills with many groups. Another nominator captured her legacy: “Fannie Belle has mentored children, youth and adults, ‘walking her talk’ with a firm but gentle manner. Indeed, Memphis is a different place, and a better place, because of her steadfast vision in a future that is brighter than our present.”