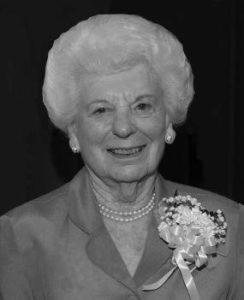 Mildred Salomon Schwartz has led her life intentionally and actively involved in the community, business, religion, golf and most of all, her friends and family.

Her life began in tiny Newellton, Louisiana, where her family was one of six Jewish families in the town. When her father died, her mother brought her children to Memphis, opened a dry goods store and lived upstairs.

When her mother died in 1934, 14-year-old Mildred and her brother were sent to live with aunts and uncles here. She married Max Schwartz, her brother’s best friend, in 1939. When he was drafted in World War II, she took over his traveling sales business, hawking women’s dresses for Forrest City Manufacturing Co. of St. Louis. She was the only woman “salesman’’ among a staff of 30 and had the advantage of being able to wear and model the line! She drove the region, hauling bags of dresses, for three years, until Max returned.

Her list of “firsts” is significant. Mildred was elected president of Temple Israel’s board, the first woman to take that seat in 135 years. She is the role model for subsequent women presidents.

Mildred was president of the Volunteer Center, the Memphis Volunteer Placement Program, the Memphis Area Women’s Golf Association, the Plough Towers board of directors and the Memphis Section of the National Council of Jewish Women. Her skills as a trainer sent her throughout the country conducting leadership training for the National Council of Jewish Women. She chaired the Communitywide Board Training Institute and taught management and leadership at Memphis State University and Shelby State Community College.

She also became adept in fundraising and chaired the women’s division of the United Jewish Appeal three times!

One of her most important and least known accomplishments came about as she served on the Tennessee Day Care Standards Committee. As an outgrowth of research done by the National Council of Jewish Women into day care conditions, she knew that conditions in many child care centers were abysmal, including many operated by churches. Mildred pressed for and won on the issue of state licensing of church-based day care centers. This regulation caused many to raise their standards of health and safety for young children.

When a car accident in 2000 resulted in five surgeries on her leg, she persisted in her president’s duties for Plough Towers, dragging her cast along with determined good spirits.

Today she continues to serve the boards of Temple Israel and Plough Towers.

A special role she takes on, with her trademark calm and light-handed teaching style, is assisting 13 year old boys and girls, as a mentor for Bar and Bat Mitzvah celebrations, a Jewish rite of passage.

Mildred has suffered many losses in recent years, but she has never lost her faith or her active concern for her community. Even at age 86, she left the Women of Achievement awards event, award in hand, to get back to the 25th anniversary dinner at Plough Towers which she co-chaired.

With our thanks for her steadfast love and service to family and
community, Mildred Schwartz is honored for a lifetime of achievement.