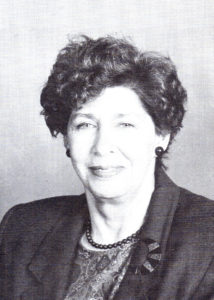 When she was 16 Mary Wright Sullivan Robinson graduated as Valedictorian from her high school. She was awarded an academic scholarship to college but World War II and family considerations prevented her from attending. After years of work in a male-dominated field, she was one of the first three women to become a registered stockbroker in the State of Tennessee. She retired in 1987 after 20 years as a pioneer in that profession.

Mary was in the forefront of women’s progress through her efforts for job banks, WAGES, the Chamber of Commerce, the YWCDA, the Girls Club, NOW, the Black White Social Group, and Republican Career Women. She was a founder and first president of the Women’s Resources Center, which in turn gave birth to two pivotal groups for Memphis women — the Spouse Abuse Center and the Rape Crisis Center. She also is a founding member of Network. In 1975 she received the National Conference of Christian and Jews first Women’s Rights Award.

Known as the “founding mother of women’s liberation in Memphis,” she has worked on behalf of the personal and professional advancement of women for so long that many are unaware that she paved the way to our acceptance. She has also been active in environmental issues and in the Civil Rights movement. Equally important as her public endeavors are her private ones. Countless women point to Mary as their role model, mentor, advisor, counselor, motivator, door opener and friend. She has shown others that they are special and capable of great accomplishment. Her example of commitment, hard work, generosity and courage inspired women to lives of public leadership and private independence and security.

From Mary Robinson’s steadfast example many have learned that respect and tolerance for all people, and the determination and courage to act on one’s beliefs, can enable us each to become a “woman of achievement.”