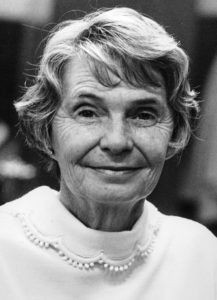 Nickii Elrod knows how to tackle the big boys. Sexism and racism in the pages of a major metropolitan newspaper? Let her at it! A railroad trying to kill a historic neighborhood? Here comes Nickii! Poor children needing a warm smile and an open heart? Tell her where they are …

Nickii came to The Commercial Appeal in 1969 as a staff reporter in what was then the “women’s section.” She had already had one career – as an Air Force wife who lived in 27 cities around the world in 27 years. She came to Memphis, the biggest city near her hometown of Greenwood, Miss., to rebuild following her divorce.

She was for many years the only feminist in the newsroom. She embraced as her own the task of being the translator in Memphis of the struggle for women’s equality. She persevered, despite the prevailing legacy of male domination and ignorance of women’s issues at the newspaper and throughout the region.

When the historic Tennessee Year of the Woman Conference was held in Clarksville in June 1977, Nickii shipped a page-one story every day. “I totaled 16 hours of sleep in four days,” she later said, and in one 24-hour stretch she worked 22 straight hours.

Her sense of fairness also reached to people of color. She joined the National Council of Negro Women and the NAACP. She wrote about issues in the black community and incorporated black people into stories about Memphis and the area in general, something that was not common then. As Angus McEachran, editor and president of The Commercial Appeal wrote of her in a nominating letter: “Not all that she wrote about were popular topics of the day, but she had the courage of her convictions and the tenacity to carry them through.”

The same courage carried Nickii when the Missouri Pacific Railroad started eminent domain proceedings to take over large tracts of land in Rozelle-Annesdale in 1975. The railroad’s plan would have turned a stable South Memphis neighborhood into a mega-center for handling cargo and 18-wheeler trucks.

Nickii joined the effort to save the neighborhood and the antebellum Raynor House. Against everyone’s advice, she bought the house, and in 1978, just short of her 60th birthday, she moved in and began its restoration, got it placed on the National Register of Historic Places and saved the house and the neighborhood.

Nickii retired from the newspaper in December 1986, but the path she blazed so courageously is still open. She led the way in coverage of women as community players beyond the “society pages.” Nickii Elrod gave Memphis women – black and white – their many voices.