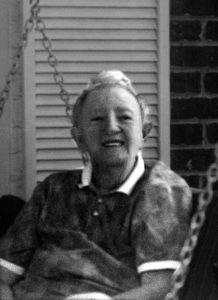 Marjorie Griffin Raines is a woman with a lifetime of achievement. She has spent more than 40 years actively advocating environmental justice, formally and informally educating people of all ages, and working within the political system to achieve positive changes for people and the Earth.

Marjorie Raines was born and raised in Gates, a small West Tennessee town. Her home was surrounded by woods, rivers and creeks, and her childhood play in this setting created a love of nature that was to be the inspiration for her life’s work.

With a degree from Memphis State College, she taught for 10 years in East and West Tennessee. In 1949, she left public school teaching and with her late husband, Hunter, moved to Memphis where they raised two sons. Marjorie continued to research the geology of the Mid-South and the Memphis water system. What she learned moved her to activism and in 1970, she joined the League of Women Voters.

As a League member she fought for the passage of a Bottle Bill, advocated recycling long before it became popular and led tours to study waste treatment centers, water pumping stations and the Allen Steam Plant. She spoke to groups across the city about the geology of the Delta and the need to protect air, water and park land.

In 1972, Marjorie worked with the League of Women Voters and other environmental groups to sue TVA for violation of the Clean Air Act. The TVA settled the suit by correcting the problems. Later Marjorie was the principal author of a citizen’s handbook designed to explain TVA’s often-complicated bureaucracy.

Marjorie participated in the long battle to save Overton Park and its old forest. When the dangers of the Hollywood Dump became known, Marjorie participated in hearings to study options for correcting the superfund site. She helped organize a workshop to help area residents understand the issues. As president of the local Sierra Club, Marjorie testified before the U.S. House of Representatives in support of the Conservation Reserve Act.

As a member of the Wolf River Conservancy, she labors for protection of the river as a natural resource and a recreation area. An ardent member of the Chickasaw Bluff Council, Marjorie works actively to create a river walk through downtown.

Marjorie Raines is a pioneer in women’s involvement in environmental issues and is regarded as an expert on local environmental questions. She has steadfastly worked to protect our environment so that future generations may experience the joys of the natural world so important to her in her childhood and throughout her life.