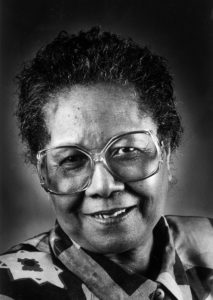 Elnora Payne Woods was born in Olive Branch, Miss., the third of six children. The school she attended in Byhalia only went through the eighth grade. In order to finish high school, she moved to Memphis and boarded with her mother’s cousin. She supported herself by working as a waitress and dishwasher seven days a week. After her graduation she continued to work to help her younger brother and sisters through school.

In 1953 she married J.C. Woods, a cab driver, and together they had four children. In 1976 Mr. Woods bought Orange Mound Cab Co. He continued to drive a cab and Elnora worked in the office. Two and a half years later her husband died unexpectedly and Elnora was left to run the company.

Elnora had a little experience but a lot of determination. She already had trained to be a masseuse, keypunch operator and data transcriber, so she had confidence in her ability to learn new things.

At first each day was a struggle. According to Elnora she initially worked just to pay the expensive insurance. “I took one day at a time and listened to others,” she said. “Then I did what I could do and what I had to do.”

Under her leadership the company became Citywide Cab and grew from a total fleet of 22 cabs to 100 cabs and from 14 drivers to more than 100 drivers. The company now is self-insured and debt-free.

In 1992, Citywide Cab was named Small Business of the Year among companies with 75 – 350 employees in the annual Memphis Business Journal awards. Her goal was financial security for herself and her family.

Through initiative, Elnora Payne Woods built a thriving business and a legacy for her children.