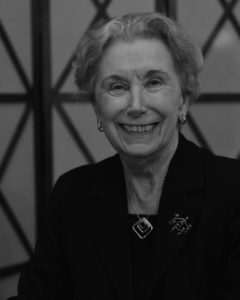 Jane Walters has spent over 40 years improving the lives of countless children, their families, and through that work the City of Memphis and the State of Tennessee through her work in the field of education.

Born into a musical family, she knew from the age of 7 that she wanted to become a teacher and started working towards that goal. A native Memphian, she completed Central High School, graduated Phi Beta Kappa from Rhodes College (then Southwestern), obtained a Masters in Counseling from the University of Memphis (then Memphis State) and earned a PhD from Duke University.

She used her education well as she went along, starting her teaching career in 1956 at Messick High where she taught math and music and later became one of the first five guidance counselors in the city. She stayed there for eleven years. Always learning, she was the Assistant Director of Computer Services for Memphis City Schools from 1971-1974. Next she became principal of Craigmont Junior High, then of the combined Craigmont Junior/Senior High. She was only the second woman to become a high school principal in Memphis. She stayed at Craigmont for 21 years, earning national recognition for the school and for her innovative leadership.

Under her guidance, Craigmont became the district’s first optional program for international studies, offering German, Spanish, French, Latin, and amazingly for the time, Japanese and Russian. By the late 1980s she had set up a sister school in Russia. Students who went there had at least a year of Russian and lived with Russian families

Jane had known Don Sundquist and his family since they moved to Memphis in the 1970s. When he went became 7th District Congressman, Jane would take bus loads of students to Washington to meet their congressman and see democracy in action. When Sundquist became governor of Tennessee, he immediately thought of Jane and her innovative work at Craigmont and offered her a job. Jane accepted and became the first woman to be Commissioner of Education in the state. She held the position from 1994-1999, managing a $3 billion budget. While there she almost singlehandedly got every school in Tennessee connected to the internet.

After returning to Memphis and a brief stint leading the not-for-profit Partners in Public Education, Jane retired.

Of course that didn’t last.

The Grizzlies wanted to do something positive for the community and decided to start the Grizzlies Academy. Wanting the best talent to develop the new school, they called Jane. She agreed on the condition that they serve students who were two grades behind. The academy opened in August, 2003 with 40 students. Wanting the students to be successful academically and socially, Jane insisted that two nights a week, the students sit down to a dinner with white tablecloths and multiple-choice forks.

Dr. Jane Walters spent a long career pursuing her goal of good education for all students and she did so during changing times. Through sit-ins and walk-outs, school integration and the women’s movement, she continued to put children first. Her interpersonal skills created a level of trust that encouraged excellence in those who worked with her.

By her own admission she was never patient enough to be political or eloquent. Of parents she has said “They don’t send us their used cars. These are their children. That’s why moms cry leaving them in kindergarten.” Jane is a straight talker – gathering a following that swears by her simple recipe of caring so much for students and their futures that the rest just falls into place.

For her steadfast dedication to education, we salute Jane Walters.