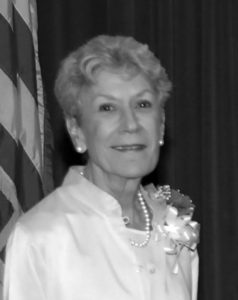 In the early 1980s, downtown minister Jesse Garner saw Donna Fortson as a woman with the ideal characteristics to lead the First Presbyterian Church soup kitchen.

Donna, a Sunday School teacher and municipal bond underwriter, hadn’t thought about volunteering in the soup kitchen, but she agreed to take the job leading the church’s outreach committee. “I thought it was somewhere that I could help,” she said.

About 25 men began to show up for meals every Sunday afternoon, and the regular group grew to about 100 by the late 1980s. With the growing numbers of people, Donna began to notice a heartbreaking change in the patrons.

“When women and children started coming to the soup kitchen, that upset me,” Donna said.

Some of the families were homeless. Others were struggling to make ends meet in nearby Lauderdale Courts. Some of the women had been abused. Donna did what she could through the soup kitchen. She and the volunteers set up special tables for children and served them milk and Spaghetti-o’s instead of the adult food. But there just wasn’t much she could do to help the families on a Sunday afternoon. Donna wanted to do more and began to envision a shelter for women and children — something that wasn’t available in Memphis then.

She started making connections, attending meetings and learning all that she could about ways to address the problems the women were facing. By 1992, her vision began to manifest, and Memphis Family Shelter was incorporated. Two years later, Donna left her investment banking career to make her vision a reality. The first shelter, which housed four families, opened in 1996 with Donna as the first executive director.

Even as the shelter opened in a Midtown foursquare, Donna and her board knew they needed a larger facility if they wanted to make a real difference. They began to plan for a larger shelter that would house four times as many families. The new $1.7 million shelter opened in December 2000, providing food, shelter and safety for 16 women and their children.

Families can stay in the shelter for up to two years; the average stay is between six and nine months. While there, they have access to counseling, budgeting help, and tutoring for their children and rental assistance programs to help the families make the move from the shelter to apartments.

More than 250 families had found temporary homes in the shelter in its first 10 years. As she begins the second decade, Donna is looking to the future. She is challenged by decreases in federal funding, but encouraged that there are now other agencies offering transitional housing for families.

“I think this is what I was supposed to do,” she said.

Rev. Garner calls the results “spectacular” and says his suggestion of Donna for the outreach committee exceeded his greatest expectations.

“I don’t remember the particular logic, though I would call it divine inspiration,” he said. “I have always described that as the single smartest thing I have ever done in my life.”

Women of Achievement agrees! Donna Fortson turned the suffering she saw in the soup line into inspiration for helping homeless women.

Donna’s vision of a home for women who have no home, of a safe place where mothers and children can heal and renew their lives, has come true.