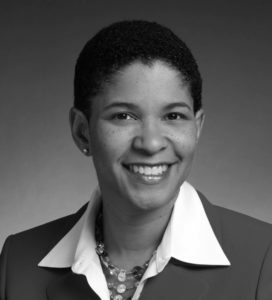 Karla’s initiative has taken her down a path that leads from Chicago to Memphis and from Memphis to Nashville, from the Environmental Protection Agency to Memphis Hope, and from there to the Tennessee Commission for Labor and Work Force Development. Each move has resulted in improved lives for people touched by her work.

Born and raised by a loving family (her parents have been married for 58 years!), Karla lived in Chicago until leaving for Atlanta to attend Spelman College. Knowing that she wanted to become an engineer, she returned home to continue her studies. She graduated with a bachelor’s degree in bio-engineering from the University of Illinois, Chicago.

She went to work for the Environmental Protection Agency. Over the course of 16 years, she assumed a number of management level positions and earned numerous awards for service along the way. While working in Chicago, she met her future husband, Terry Davis, through salsa dancing. In 2006, after enduring years of brutal winters, the couple decided to move to his home town of Memphis. Lucky for us!

Using her excellent networking skills, Karla took the initiative to meet Ruby Bright, director of the Women’s Foundation for a Greater Memphis. Impressed by Ms. Bright, Karla offered to volunteer for the foundation. This connection led to a position as director of Urban Strategies for Memphis HOPE. She committed herself to creating opportunities for families of the former Dixie Homes and Lamar Terrace communities. This was a huge challenge as most families were headed by single mothers whose situations had been deemed hopeless by others.

Karla was responsible for establishing cooperative relationships with other organizations, identifying funding opportunities and leveraging resources to help move these families out of poverty. She says Memphis HOPE’s goal was to “serve the whole family, by connecting adult residents with employment preparation and job training programs, connecting youth with tutoring and enrichment programs, and connecting seniors and the disabled with service programs.” Karla accomplished this by supporting a range of intervention strategies designed to permanently lift these families out of poverty and into self-sufficiency. Over 400 families benefited.

In 2011, Tennessee Governor-elect Bill Halsam offered her the job of Commissioner of the Tennessee Department of Labor and Workforce Development. She says, “I was shocked and incredibly excited and honored. This was bigger than I could have ever dreamed.” She accepted. She was one of six women to be appointed to his 24-member cabinet. She now commutes between Memphis and Nashville. Karla manages a staff of nearly 2000, with offices all over the state, and administers a $220 million annual budget. She has embraced the massive task of bringing an industrial and agricultural based workforce into the world of technology and advanced manufacturing.

People who use the services of her department are often in crisis. They may be unemployed, have lost their jobs unexpectedly, need job training. In our current economic climate, they often feel desperate. It is her goal to provide them with excellent customer service so that they know that they are respected and that their voices are heard.

She says: “My entire career has revolved around public administration of some sort. I wish I could say I always wanted to be a public servant, but really it found me. Memphis has been a place of tremendous opportunity for me. I count moving here as one of the best decisions I ever made.”

Karla Davis uses her initiative with compassion and kindness to improve the lives of those she serves.

For this, we salute her.