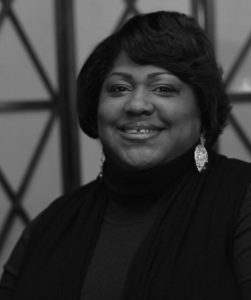 Felica Richard knows what it is to be misused and abused. She knows about being hurt – with verbal and emotional abuse, molestation and rape – and not telling anyone. She knows how important it is to have access to the right help when you ask for it.

Her own experience has made Felica Richard determined to help survivors of violence feel strong and feel good about themselves. She has created an organization, recruits fellow cosmetologists and works beyond her paid job as a victim navigator at the Family Safety Center to offer extra support for those in need.

Felica has lived in Memphis all her life. She grew up on the city’s north side, third of five children in a family where her parents were not married but her dad lived a few blocks away.

Her school friends at Craigmont Middle and High School often sought her out for advice. Even at that early age, Felica found herself drawn to the wounded and rejected.

She understands now that it was the molestation by a family member and the rape during a date as a young teenager that caused her not to love herself. This under laid her drinking and promiscuity as a young adult, her bounce between multiple colleges and stack of college loan debt. She married – but won a divorce within six months to escape verbal and emotional abuse.

Eventually Felica entered and completed cosmetology school and began to work full-time as a hairdresser while also beginning a social work degree. After coursework at Southwest Tennessee, Middle Tennessee and University of Memphis, Felica earned her bachelor’s degree in social work in 2009. She interned at the Shelby County Crime Victim Center and continued to “do hair” part-time.

By then Felica had been a mom for six years, having adopted at birth a baby girl born to a family member.

Since she graduated from high school in 1989, Felica has had a dream of building a safe haven for hurt women and their children. Felica calls the organization she founded in 1999 Women Loving Themselves First believing “If I can get the mother together, she can take care of children. I’m looking to help her build her self esteem, give her hope, love herself and then she can give love. You can’t give what you don’t have.”

She began her outreach simply with a routine of communicating encouraging emails and prayer requests. In 2009, she began offering direct services to women referred to her by other agencies. She provides help with their immediate needs, especially temporary emergency housing, often by reserving motel rooms in her name – to protect the fleeing woman. “I pay a night and they pay a night,” Felica says. She rents a U-Haul for those who need it and puts their belongings in storage. Sometimes she styles their hair for free.

Now a full-time navigator for domestic violence victims at the Family Safety Center, Felica still recruits colleagues in local salons to give violence survivors professional makeovers to prepare them for court or a job interview. She is offering training on the dynamics of domestic violence to local professional stylists.

Her goal is to raise funds for a gated community where survivors of abusive, violent relationships could live during their healing, both single women and mothers, with programs for children, comprehensive case management and constant security.

“I’m a server. . . I went into social work because that’s where God needs me and I can help women. . . I compare myself to David and domestic violence is Goliath. I believe that giant can come down – I really do.”

With her passion for helping and her determination to be of service, Felica Richard will be here to help women damaged by violence for many years to come.