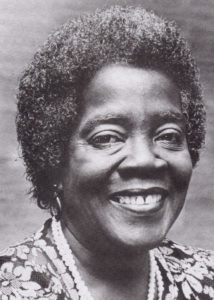 HEROISM
for a woman whose achievements still enrich our lives:

Alma Lovett stepped out of the crowd and took the lead when drug crimes, violence, truancy, and lack of day care screamed for attention in her community – Memphis’ public housing projects.

Mother of six children and herself a high school dropout, she moved into Fowler Homes public housing 16 years ago. Soon she founded the Fowler Homes Youth Club to organize, entertain, and motivate her young neighbors to make something of their lives. She was elected president of the City-Wide Memphis Housing Authority Resident Council five years ago.

Outraged at what was happening to children in her world where murder and drug running can seem a way of life, she coalesced housing project tenants who marched on City Hall and drew police response for more patrols. She created and personally runs a free day care program that now tends 100 children. She attempted a program with school officials and Juvenile Court to keep children in school by targeting truants lingering near the housing projects and bodily taking them to class. Since her march on City Hall in October 1987, her car windows have been shattered and she has received threatening phone calls. But she carries on.

In August 1988, she became the first resident manager of a Memphis housing project when she took charge of her 320-unit apartment complex. She says, “I used to be fast. Now I’m in a hurry.”

A profile of Alma in May 1988, in The Commercial Appeal was headlined, “Neighborhood Hero.” Tennessee Illustrated magazine last month chose her as one of 20 “Good Folks … the state’s unsung heroes who in their own quiet and relentless ways are building a better Tennessee.”

A young man who attended the Fowler Home Youth Club and calls himself one of Alma’s success stories, said of her new battle against drugs in his old neighborhood: “It’s going to be a struggle. But if she can overcome that, she’s going to be a hero. She’s my hero, anyway.”

Alma eventually left public housing and worked as a manager of privately-owned apartments.