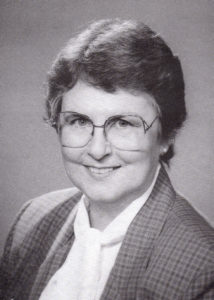 Shera Bie was an elementary school teacher in 1968 when her eight-year-old daughter was diagnosed with learning disabilities. She soon joined the fledgling Memphis Association for Children with Learning Disorders — and began 24 years of passionate, skillful advocacy for handicapped children and adults in Tennessee.

In 1968, the MACLD was largely a support group for parents of children with learning disabilities. In her first of four terms as president in 1974, she organized groups in Tennessee into a state affiliate of the national ACLD, Inc. and was elected the first state president.

When Shera discovered that Tennessee’s Mandatory Special Education Law, passed in 1972, was not being implemented, she organized 85 related Memphis groups to support implementation and full funding. More than 300 parents and children came to a Nashville rally to hear 13 parents address the state House of Representatives. Two days later, Shera and some of the speakers met for 90 minutes with Gov. Winfield Dunn and the state finance chairman. As a result, $1.5 million was added to the governor’s special education budget.

In 1978, the national ACLD recognized the need for families to have assistance in order to use the 1975 federal law to gain access to appropriate special education services. After attending national training sessions, Shera and six others began what is now Effective Advocacy for Citizens with Handicaps (EACH), the state protection and advocacy agency with three offices across the state.

Through the 1970s and into the 1980s Shera devoted hours to both the local and state organizations. She had a business telephone in the name of ACLD installed in her home. She took care of newsletters, educational meetings, parent coffees and dispensing of information. She presented programs for schools and civic groups. She appeared on radio and TV programs. She arranged with the Memphis City Schools Mental Health Center to join MACLD in publishing the first Learning Disorders Source Book, a free listing of all agencies in Shelby County, with services for individuals and their families.

As volunteer involvement declined and active chapters faded, she worked with a small group to reactivate the state organization and find for it a funding base that would permit a paid staff. In 1984, Shera was hired at token pay as the first executive director and she developed a strategy to secure United Way funding by bringing to Memphis from Minnesota a parent support and education program base on building self-image.

When she stepped down in 1992, Shera left in place a vigorous organization with two employees, a committed volunteer base and a budget of $66,236. The program benefits enjoyed today by many exceptional children are the direct result of Shera Bie’s untiring determination.