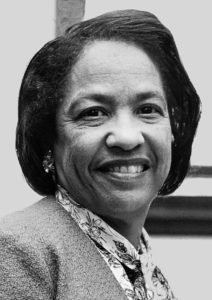 As early as fifth grade, Juanita Williamson knew she wanted a Ph.D. When she enrolled in the doctoral program at the University of Michigan, one of her professors made it clear that he didn’t believe linguistics was an appropriate pursuit for women. He also implied that he didn’t think much of minorities. Though she felt her work deserved otherwise, he failed her first paper. Determined to never have that happen again, she began to take down every word and memorize her notes. She received her Ph.D. in 1961.

She joined the faculty of LeMoyne-Owen College in 1947 and later became Professor of English and Chair of the Humanities Division. Publications include A Various Language (1971) co-authored with Dr. Virginia Burke and a standard reference in linguistic studies. Her reputation led to serving on the boards of the American Dialect Society, the Modern Language Association and others. She received a Rockefeller Fellowship, was honored by the Ford Foundation and the Black Studies Association. An Amistad Research Grant led to study of Southern and black speech. She presented papers at Princeton, Stanford and the University of Wisconsin. She found time for community activities such as the YWCA, Girl Scouts and League of Women Voters.

Juanita’s interest was the structure of language and grammar, her deep concern for the achievement of African-American children and the correlation between their learning performance and their speech. This led her to examine the effect of speech customs of the South on students. She was widely acclaimed for her research. Though she could have gone elsewhere, she chose to stay at LeMoyne-Owen. Committed to the role of historically black colleges she felt she could make a real difference in the lives of her students. According to author Dr. Gloria Wade Gayles, academic excellence at LeMoyne-Owen was synonymous with Dr. Juanita Williamson. She was tough, witty, brilliant and humble. And she cared about students in and out of the classroom, providing financial assistance for those who fell on hard times.

She died in 1993, but her greatest gift is still giving – empowering her students who continue to contribute today. They pass on her torch of knowledge and strength of character.