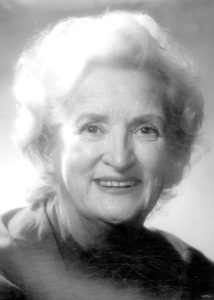 Until her death in 1989 at the age of 72, Marion Keisker blazed a trail for women in many fields, including broadcasting, theater, writing, the military and women’s rights.

In the 1950s, while working as an assistant to the owner/producer of Memphis Recording Service and Sun Records, Sam Phillips, she was the one who had first contact with Elvis Presley when he came to record a song for his mother. “Call this kid Elvis,” she told Phillips, “I’m telling you, Sam, he’s got something.” The rest is history.

Her broadcasting career includes 10 years (1945-55) at the top of the ratings with her WREC radio show Meet Kitty Kelly. At one time, she was responsible for daily programs on every radio station in the city. Hers was the first voice heard on WHER, the first all-female radio station in the country, where she read the news from 1955 to 1957.

Shortly thereafter, Marion joined the Air Force with direct commission as a captain. After training at Lackland AFB in San Antonio, she was assigned to Vance AFB in Enid, Oklahoma, where she was the only woman officer (other than nurses). In January of 1959, she was transferred to Ramstein AFB in Germany, overseeing the largest armed forces television station in the world. Next, she served as the only woman line officer at Patrick AFB in Florida. She retired in 1969 as a major and returned to Memphis.

It was then that she became deeply involved in the women’s movement. As founder and president of the Memphis Chapter of NOW from 1973 to 1974, Marion led the fight to “de-sex” the classified ads in local newspapers so jobs would no longer be classified by gender. Promoting the Susan B. Anthony silver dollar, she said, “They finally gave us our money, now let’s show them its effect on the economy.” Through her membership in the Women’s Media Group, she fought discrimination against women in the media.

In the 1970s and 1980s, she became known for her theater/broadcasting work. She was voted the city’s Best Actress three times. She also led the “Shy Persons Club” and organized to keep Prairie Home Companion on WKNO.

Always on watch, Marion’s frequent letters to the editor of local newspapers often spotlighted incidents of discrimination against women. In one such letter printed in 1986 in The Commercial Appeal, Marion responded to the issue of a lax attitude toward sex discrimination saying, “… gains are accepted as the norm by those who benefit from them. Those who grow weary in the fight for equality (i.e. justice) relax. Progress slows or is reversed.”

Marion Keisker’s spirited service to the community and steadfast crusade for equal rights has benefited all women of Memphis and Shelby County. Her call to remain diligent is a strong reminder that the fight is not over.