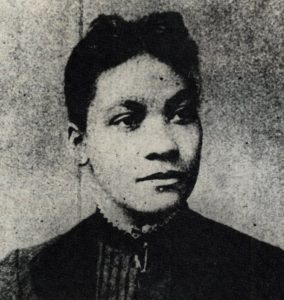 Georgia Esther Lee Patton was born into slavery in 1864 in middle Tennessee. Her father died before she was born leaving her mother to care for her and her siblings. She worked as a laundress for 14 years until her death in 1880.

Somehow, despite limited opportunities, Georgia managed to complete high school, the only one of her family to do so. Then her siblings saved money to help her attend Central Tennessee College (now Fisk University) in Nashville where she graduated in 1890. Two and a half years later, she completed a medical degree at Meharry Medical College as one of two female graduates.

This daughter of slaves, a gifted student who had worked long hours to earn money to pay for her medical education, next scraped together funds to pay for a missionary trip to Africa! And who should be in the other berth on her trip across the Atlantic but Ida B. Wells-Barnett, heading to England to launch an anti-lynching campaign.

Georgia sailed on to Monrovia, Liberia. She began seeing patients. In a letter to her medical school dean, she wrote: “On examining my first case, remarks made by the natives were: ‘Patients in his condition never get well; we always expect them to die.’ After careful treatment and watching for two months he was able to leave his bed, and finally went to his work.” Her medical work was apparently exhausting and after two years, she returned to the United States, having herself contracted tuberculosis.

She opened a medical practice in Memphis. Her practice became “large and lucrative,” according to her medical school dean, G. W. Hubbard. She became the first black woman to receive both physician’s and surgeon’s licenses from the state of Tennessee.

She became well established among Memphis’s sizeable community of black middle class professionals. One of the most prominent was David W. Washington who had in 1874 become the first black letter carrier in the Memphis Post Office Department. He amassed a fortune in real estate. He was 12 years older than his bride. The two married in December 1897. In 1899 she gave birth to a son, Willie Patton Washington, who died soon after his birth.

Georgia was deeply involved as a volunteer in her church and community – and she also became known for her philanthropy, particularly with the Freedmen’s Aid Society. Her devotion to donating $10 in gold every month earned her the nickname “Gold Lady.”

She also was clearly a feminist. When the Freedmen’s letter of thanks was addressed “Dear Brother” she responded plainly: “I am not a brother… Say Sister next time.”

Five months later – after three years of marriage and only four months after giving birth to her second son – Dr. Georgia Patton Washington died, having never really regained her health due to the tuberculosis.

She was 36. Her baby son died soon after. Both are buried in Zion Cemetery, established by ex-slaves in 1867 on South Parkway East.

Dr. Georgia Patton Washington blazed the way for women of color in medicine, rising from slavery to care for patients as the first female African American physician and surgeon in Tennessee. We honor her tonight as a Woman of Achievement who still enriches our lives and whose story inspires us to push past any obstacle of birth, background or circumstance to become all we can become.