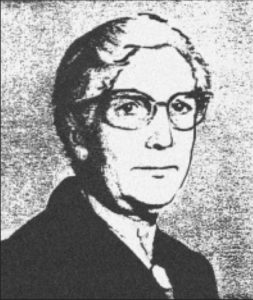 In 1922, the then 38-year-old Alma Hanson came to serve at the then-LeMoyne High School. She stayed until her death in 1962, at age 78, at the school she had helped nurture into LeMoyne College. During those years Miss Hanson dedicated her life to the growth of the school in order to improve the lives of the African American students who passed through its doors and thus to improve the lives of all African Americans living in the South.

Alma Hanson was born in Williamsport, Pennsylvania in 1884. As a young girl she lived in Sweden and attended school there. A dedicated idealist, she studied business administration at New York University before joining the American Missionary Association of the Congregational Church. Her first assignment was to Palledelia, Alabama where she served until World War I, when she accepted a position with DuPont. In 1922 the American Missionary Association assigned her to LeMoyne High School. She moved into a small apartment on campus where she lived for the rest of her life.

For Alma Hanson, her work at the school was not just a nine-to-five job. She became involved in all aspects of life at LeMoyne-Owen as well as being active in civic groups in Memphis. According to Annette Hunt, Director of LeMoyne’s Hollis Price Library, Miss Hanson’s name is sprinkled throughout the college newsletters and archives. During her time, she was an intricate part of the success of the school and the success of its students. She was just a “good fit.”

For many years, Miss Hanson’s full-time job was treasurer of the school. She oversaw the financial transition of LeMoyne from a high school to a junior college to a 4-year college. During that time she also served in other capacities, at one time temporarily serving as acting president.

When she retired in 1952, she continued to live on campus and took on the job of Superintendant of Buildings and Grounds. She was especially fond of the grounds and cultivated a beautiful rose garden.

Over the years, Alma Hanson was active in the League of Women Voters, serving as board member and treasurer for eight years. Nominator and Women of Achievement Courage Recipient Anne Shafer says, “ (Miss Hanson) welcomed me to the board in 1958 as secretary. The racially integrated organization was new to me, and it was not popular in the South at that time. I had many things to learn about people and their role in a democratic government; (she) was patient and kind and a wonderful role model.”

Miss Hanson also loved theatre and music and had an excellent sense of humor. A 1960 article in the Memphis Press-Scimitar describes her portrayals of “illiterate” and “handicapped” voters in League of Women Voters skits. Though intended to be humorous, the skits were designed to make an important point about everyone’s right to vote.

Alma Hanson continued to be as active as possible until her death in 1962. At her death, it was found that from her meager pay as a missionary, she had saved $30,000, a substantial amount at that time. This was used as the seed money for the building that became the Alma C. Hanson Student Center, the first building on campus to be named after someone who had not served officially as president. At the dedication, the college said of her, “Her interests were as broad as the world. She knew no pettiness nor did she concern herself with parochial or provincial interests.”

Following her death, in keeping with her request, her body was cremated and her ashes scattered over her beloved rose garden.

Alma Hanson’s life of focused, determined service and lifelong commitment to her cause left the legacy of opportunity for generations of students at LeMoyne-Owen College. She shows us the possibilities of one individual’s devoted purpose – our 2009 honoree for Heritage, Alma Hanson.