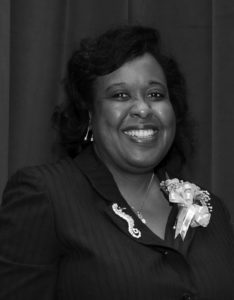 After a decade of being told “black audiences won’t support the arts” and “Memphis arts supporters aren’t interested in attending diverse performances,” Rebecca Edwards got tired of hearing these things and established the Cultural Development Foundation of Memphis. For more than seven years, the CDFM has been bringing a culturally diverse range of performances to culturally diverse audiences that mirror the rainbow that is Memphis.

Rebecca Edwards was born loving music. In the mid-seventies, she joined the band at Sherwood and began playing the clarinet. Now — usually clarinets play harmony but Rebecca has always been determined to go her own way and consistently, over the objections of her band director, she played the melody. Finally the poor man gave up and added the phrase, “Ms. Edwards, your solo, please,” to his standard conductor’s spiel.

Rebecca continued on her own path in the Wooddale High School band. It being the late 70s with integration still fairly new, the band director decided that rather than rank the four African-American clarinetists, he’d name them all to fourth chair. Still dissatisfied with playing harmony, Rebecca insisted upon being given the opportunity to move to a higher chair — second, home of the clarinet melody!

It was in high school that Rebecca was introduced to theatre. Wooddale’s truant officer came to Greek Club looking not for truants but for volunteers to usher at the Orpheum. Rebecca went and for the first time experienced professional theatre. She was so caught up in the music of My Fair Lady that she missed the plot. She volunteered for the next few shows so that she could absorb everything about the play! During her junior year at Christian Brothers College, her English lit professor required the class to see The Emperor Jones at Circuit Playhouse. For the first time, Rebecca saw a theatre production with a black protagonist. She was amazed. In the late 80s, after entering the corporate world, her regional manager insisted that she see the first Memphis production of Cats. She loved it.

Having spent lots of money for an up-close seat and parking, not having a date, and remembering that ushers see the show for free, she embarked on her life as a volunteer usher.

She’d see shows over and over, always thrilled. But she grew increasingly aware of the lack of diversity in audience and productions. She mentioned this regularly to many theatre types and was consistently told that African-Americans wouldn’t pay to see the arts and that typical Memphis audiences (European-American sorts) weren’t interested in seeing diversity on stage. After years of unsuccessfully trying to convince local companies to do something, she took on the mission herself and formed the Cultural Development Foundation of Memphis.

The first show was Sing, Sister, Sing. It was a big hit. But immediately she started receiving calls from educators saying, “What about the kids? They need art, too.” And so, knowing from personal experience that this is true and that art is a cultural bridge, she decided to make sure that every Cultural Development production would include student performances.

Since 2000, CDFM has presented over 65 performances seen by over 67,000 people. Half have been young people under the age of 18. Rebecca’s dream is for CDFM to have 1,000 subscribers and to get a big NEA grant. CDFM is currently planning “Breaking Bread; Breaking Barriers,” which seeks to pair families of different cultural heritage to share a meal together and then attend a performance. With Rebecca’s determination, we’re sure that this next arts bridge will be built.

Rebecca Edwards is now the Executive Director of Cultural Arts For Everyone (CAFE), a presenting arts organization with a reputation of presenting high-quality, diverse programming that educate, entertain, and engage students, new audiences, and underserved communities.