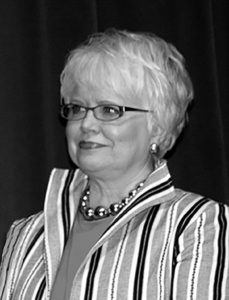 Child sexual abuse. We don’t like to say the words aloud, much less talk about the problem. We don’t want to believe it happens in our community, to children we know, perpetuated by people we know. Yes, we know that it does happen, but not around here.

That was the case when Nancy Williams took on the job of director of the fledgling Memphis Child Advocacy Center in 1994 and that is the case today. Yet Nancy’s “dogged, persistent” determination has led to comprehensive services that make a huge impact on the lives of young victims and their families in Memphis and Shelby County and, that serve as a model for similar services all over the nation.

In 1994, Nancy Williams was completing a graduate degree while working full time and, with the incalculable help of husband Robert, raising two teenagers. Graduate school was nourishing her soul and she knew that her future work needed to be something that engaged her whole being. Having met the first Child Advocacy Center (CAC) Director Nancy Chandler through the Human Services Co-op founded by WA Recipient Jeanne Dreifus, she called to wish her well in her next job and ask who would be the Center’s next Director and just like that, Nancy Williams’ resume, name not attached, was in the mix.

Two months later she was on the job and two months after that, she wrote a therapeutic email of the “why didn’t you tell me” sort. Nancy was stunned by the apathy and inertia. People just didn’t want to believe that child sexual abuse existed. Organizations and institutions are slow to change. According to Nancy, it was like trying to move through a swamp, excruciatingly slow and filled with hidden obstacles. But Nancy came to CAC after seven years with the Mental Health Association and a brief stint with the Children Museum. She was used to hard work.

But this story isn’t just about numbers; it’s also about the changes in service that these numbers represent. Nancy was determined to improve the experience of those children brave enough to speak up and look for a way out of their horrific situations. Solving child sexual abuse can’t be done by any single agency. It requires a group of agencies working together to reach that common goal.

Recognizing that urban environments come with a whole set of communication problems, Nancy decided that bringing the necessary groups to one site would vastly improve the results for young clients and their families. She used her vast diplomatic skills to push her vision forward. After all, she says, “Modern technologies even email can’t replace a cup of coffee.”

Now in addition to CAC’s staff, on-site offices include those of the Memphis Police Department, Children’s Protective Services and the District Attorney’s Office. The multi-disciplinary approach includes intervention, investigation, prosecution and treatment of abuse. Each day representatives from all four groups meet as a team to discuss each case and do the best possible work for each child. Cases now total over 2,000 annually. And thanks to the introduction of a revolutionary tracking system, each case can be followed and results used to improve outcomes for those children who follow. Forensic interviewing and counseling are done on site. Families enter the lobby and are immediately greeted with smiles, friendly voices and a wall of teddy bears of all shapes and sizes. Families are shown to a child-friendly waiting area and kids are offered snacks. And each young client receives the teddy bear of his or her choice for each visit.

Under Nancy’s leadership, prevention education has moved to the forefront. In 1994 there were age-appropriate presentations for 725 school children. In 2008, over 10,000 individuals, including children, teachers and parents, saw presentations by both staff and volunteers. Believing that child abuse is preventable only with the help of the community and wanting to make the problem more visible, in 2002 the Children’s Memorial Flag was raised for the first time. This flag flies every April in honor of Child Abuse Prevention Month and flies for one week each week following the death by abuse of a child in Memphis and Shelby County.

In conjunction with the flag-raisings, the Center sends email alerts that are heart-stopping. Sadly, most deaths are of children under one year. Realizing that where there is child abuse there is often domestic violence, Nancy was at the table when discussion of a Family Safety Center began. She secured approval of the board for the CAC to become the incubator for the new program, which will open its doors later this year. Asked how she’s accomplished so much, Nancy responds, “Not by myself.” She mentioned the importance of finding people who are in places who can make a difference and calling upon those people. Just take a look at the incredible staff and board of the Child Advocacy Center and you’ll see that Nancy has a great gift in finding those people. She describes many instances of the right people putting themselves in the right place at the right time. She says that while some people believe in coincidence, she believes in god-incidence and quotes Margaret Meade, saying, “A small group of people can do amazing things.”

Whatever the reasons, we know that it is Nancy Williams’ determination that drives Memphis Child Advocacy Center in its vision is a community where children are safe, families are strong, and victims become children again. And we salute her.