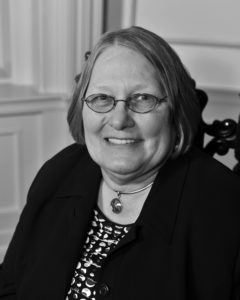 Onie Johns is living proof that steely determination can reside in the personality of someone who nevertheless is the very model of serenity. This quiet and humble woman began a journey that has turned her into an example for anyone who wishes to break down barriers between rich and poor, black and white, fortunate and unfortunate.

The journey began when Onie enrolled in a Servant Leadership class in order to explore her faith and spirituality. Taking what she learned in this experience to heart, it soon wasn’t enough to travel from the suburbs to the inner city, and then back to the comforts and safety of home. She felt drawn — indeed, she felt a calling — to make an inner city neighborhood her home. And so, Onie sold her house in Germantown and purchased a modest home in Binghamton where she immediately began working to improve her new community. She called it Caritas House, opening her door for aid, shelter and reconciliation.

Soon she acquired an old Masonic Lodge building in the heart of the neighborhood and founded Caritas Village, a friendly café and cultural center seeking to “break down walls of hostility between and among people and cultures, and to build bridges of love and trust between the rich and those made poor.”

And Caritas Village has become exactly that. People of every stripe, background and situation can be found there on any given day, sipping coffee or tea, sharing lunch, holding a meeting, taking a class, hanging art, exhibiting photography, learning a skill, or just being neighborly. Programs aim to help in job networking, skill training, healthful living, and self-worth development.

Binghamton once was a thriving blue-collar neighborhood built around a one-time boxcar factory. The area went into steep decline as the interstate highway approached Overton Park. The highway never was finished, but Binghamton almost was finished as a community. Now all that is changing.

Caritas Village has become a catalyst for change, a ministry where being present in community is the most important and faithful ingredient to success. And success is defined by the number and kind of human relationships that are built and sustained.

Caritas is a Latin word for charity — charity in the classic and in the biblical sense, which is not just feeling love for others, but acting in love for others. This is the basis of Onie Johns’ determination — a resolve to live out her faith where ignorance and apathy often prevail, where disunity and self-destructive behaviors have hurt a community that with help still can regain its self-respect and dignity.

As Onie herself says, Caritas Village is a place “where small miracles happen every day.”

Onie Johns truly is a model servant leader whose bright determination is solving a glaring problem every day as the sun comes up.

Onie Johns retired from her position as Executive Director of Caritas Village on February 4, 2017.