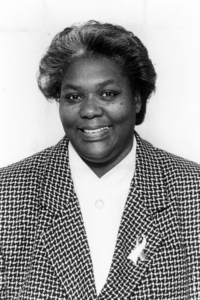 When JoeAnn Ballard was a little girl in Mississippi, her father read her the biography of Florence Nightingale, a young English woman who, against her family’s wishes, became a nurse to help others. Fascinated by this story, JoeAnn decided that her mission in life was to serve the poor. Decades later she continues to fulfill that mission through her work as executive director of the Neighborhood Christian Centers, which started in 1978 with one small location. The Neighborhood Christian Centers now consist of five local centers plus affiliates in other states. More than 15,000 people are helped each year.

JoeAnn was born in Mississippi into a poverty-stricken family. When she was an infant, she and two siblings were left with their great aunt and uncle, who provided a home filled with love. That home was opened to many foster children, an example that JoeAnn would follow. As JoeAnn grew up, she remained determined to battle poverty; she just wasn’t sure how. During an assembly program in her first year of college, she heard a couple talk about Christ and knew that she had to become a Christian. She applied to Nazarene Bible College in West Virginia. Upon her arrival JoeAnn found that she was the only woman in a large group of men, but was determined to stick it out. Upon graduation she came to Memphis to reopen a church. That fall a child in Sunday school came to her and said she needed a sweater. JoeAnn bought the sweater and began her mission with the poor.

The following year she met and married Monroe Ballard. Over the past 30 years, they have been foster parents to more than 75 children while raising three of their own.

The Neighborhood Christian Centers started with $15,000 from Second Presbyterian Church. At first, JoeAnn was the only employee. Under her leadership, the center became the largest Christian social service agency in the state. “I don’t know who has done more than JoeAnn Ballard for the poorest of the poor,” said Larry Lloyd, president of the Hope Christian Community Foundation. “She is a deeply faithful woman.”

The center’s services include tutoring, college assistance, adult education, job training, legal and financial counseling, clothing closets and food distribution. JoeAnn tries to make sure everyone who comes in contact with the ministry is served one at a time, accomplished only with the faithful help of 40 paid staff and many volunteers. The center’s budget is funded through churches, foundations and individuals. There is no government assistance. JoeAnn says, “Our aim is not to eradicate poverty. Our aim is to help people who are poor and to spread the gospel.” How has JoeAnn made such an impact? She says, “We try to feel a person’s pain and meet that person’s need.”