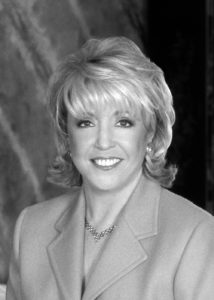 Carol Prentiss is a leading philanthropist with an equal knack for raising funds from others. With a record-setting history of support for local causes, it is her long-lasting determination to raise awareness of the too-often hidden tragedy of child sexual abuse that reverberates the most.

Carol, like her husband Jim Prentiss, long has given generously of her personal wealth. Carol also has worked tirelessly to raise money for such important not-for-profits in our city as the Memphis Zoo, the YWCA’s Spouse Abuse Shelter, Brooks Museum and the Memphis Child Advocacy Center. Carol considers the Child Advocacy Center her “special cause.”

Her heartfelt conviction that the abuse of children should be fought openly and prevented by every means possible led to efforts that will have profound effects for decades to come.

Carol rose from modest beginnings. After working for Shoney’s South for 22 years she found herself the highest-ranking woman in the company as a division director overseeing 26 restaurants in the Carolinas. After her move to Memphis and marriage to Shoney’s chief executive, Jim, in 1986, she dove into charity work with an equal amount of energy. Soon, the two of them were a dynamic duo in fundraising circles.

When Carol discovered the newly formed Child Advocacy Center in 1990, she found a cause to call home. She stepped in to help where needed and has not slowed yet.

The CAC’s founding executive director, Nancy Chandler, reports Carol “came to the rescue of the struggling-to-be-born” center. Chandler said Carol immediately recognized the overwhelming need and provided voluntary leadership that has grown and matured over time.

Current executive director Nancy Williams credits Carol for shepherding her through her first few years on the job. “Carol has never moved from the role of advocate when she talks with people in our community about sexually abused children – not a popular conversation topic,” Nancy says. She adds that Carol “is a champion of children … what matters most to Carol – and what she lives out – is that she makes a difference in the life of one child.”

A decade and a half after joining the cause, Carol has made a difference in the life of countless children. She worked to bring about a successful opening of the center in the former Four Flames Building in 1992, and the construction of a new wing in 2000. She has supported the development of a multidisciplinary team, which reviews more than 2,000 reports of abuse annually. Every year she chairs a lavish gala event that raised $35,000 its first year and last year netted more than $200,000 for the CAC. She speaks tirelessly on behalf of the center and has made dozens of face-to-face requests for major donations.

Apathy, ignorance, inertia – all have vanished in the wake of this one-woman embodiment of determination.

Carol Prentiss currently serves on the CAC’s Board Emeritus as a community volunteer.