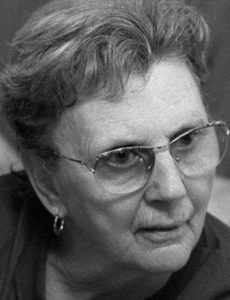 A nurse at Arlington Developmental Center, Frances McMahon saw mentally disabled people being abused and neglected. Told to ignore abuses, she got angry, got involved and got things changed. It started with her deep concern over a 4-year-old boy named Seth. For two years he was kept locked in a room by himself with no mat and no toys. This was how development technicians were handling the problems of the self-abusive child at Arlington.

Nurses at Arlington were told not to report abuses. Abuses noted on medical reports were either erased or changed. During Frances’ efforts to help Seth, other nurses started talking about patient abuses, inept medical care and poor management at the facility. When supervisors refused to address the problems, Frances and the nurses went outside the facility for help – first to State Representative David Shirley. He took them to then-Commissioner of Mental Health and Retardation, Eric Taylor, who warned them not to get involved. Next they went to Governor Ned McWherter, who also told them not to pursue the issue.

Finally, they went to then-U.S. Attorney for West Tennessee, Hickman Ewing. He turned the matter over to the FBI and the Justice Department and finally an investigation was launched. Frances made daily reports from Arlington. Suspicious that she was helping the investigation, her supervisors constantly scrutinized her work and made her time on duty as difficult as possible.

Later, McWherter said that the investigation was his first knowledge of abuse at Arlington. He remembered that he had spoken with some “disgruntled employees” who complained about working conditions, but said that he was never told by an employee about any clients being abused. Likewise, former Commissioner Taylor claimed that there were no reports of falsified medical charts and no outcry from staff that people were being mistreated, and that furthermore, if there was any wrong doing reported, it was immediately investigated and resolved.

Today Frances McMahon is retired and Arlington Developmental Center is under new management. The center remains under constant scrutiny by a court-appointed monitor to show that patients are receiving the care they deserve. “Don’t underestimate the role she played,” say Justice Department officials of Frances.

Frances McMahon ignored repeated warnings not to get involved in the problem. She faced active opposition from her supervisors, the Commissioner of Mental Health and the governor. Despite efforts to stop her, our 1996 Woman of Courage continued until the rights of patients were finally recognized and steps were underway to improve the lives of the mentally disabled residents.