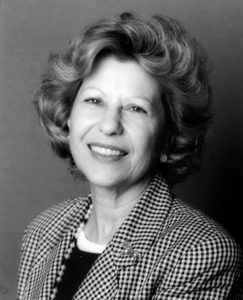 Bert Prosterman Wolff has been a strong advocate of public education and quality education for all.

The first of her four children was born the year that the U.S. Supreme Court ruled that “separate but equal” was no longer acceptable. She remembers vividly the day, less than six years later, when a half dozen African-American children entered Avon School surrounded by patrolling police and some angry, vocal citizens.

“After Dr. Martin Luther King Jr. was assassinated, I was even more determined to help Memphis City Schools become as good as they could become for all of our children,” Bert said.

As the NAACP and school officials negotiated desegregation, starting with “Plan A,” Bert and others created and staffed a Rumor Control Center, supported by and housed in the Chamber of Commerce, to initiate networking groups to calm and educate the community with facts, not rumors. She was a volunteer guidance counselor at Carver High, and a member of the Panel of American Women, Better Schools Committee and the integrated Frances Hooks book club for women.

In 1979, she ran for and won school board Position 2, at-large, a citywide race. From 1980 to 1984, the community was again polarized over desegregation, school prayer and family-life curriculum. As board president in 1983, she was a leader in negotiations of policy changes necessary to initiate the final steps of “Plan Z” so that neighborhood schools could begin to be reinstated after the city’s desegregation struggle. She found little support in the white power structure; her friends, Congressional delegation, and City Council and County Commission members urged her to oppose the last step to integrate Memphis City Schools. She would, they said, lose her re-election if she supported Plan Z.

Finally, after months of meetings and comments from parents, teachers, lawyers and staff, the board met at 5 p.m. and voted at 1:25 a.m. Four voted yes, four voted no. “As president, I cast the final and deciding vote – the tie breaker – to integrate. All hell broke lose … I had to be escorted home.”

For the next eight months, Bert received hate mail, bomb threats, obscene phone calls nightly from 2 to 5 a.m. And she lost her bid for a second term. “Was it worth it? Would I do it again? Absolutely.”

Bert was founding executive director of the Epilepsy Foundation of West Tennessee from 1975 to 1983 and brought it to national recognition. From 1990 to 1993 she served Opera Memphis as executive director. In her seven years at the Memphis Botanic Garden, Bert held positions including foundation director and assistant director before her retirement in 2001.

She is a charter member of the Panel of American Women, founding member of Network of Memphis and has served on the boards of the Wolf River Conservancy, Metropolitan Inter-Faith Association, Temple Israel, the National Conference of Christians and Jews, and the State Commission on Women.

Bert Wolff continues to fight for equality in the Memphis School system.