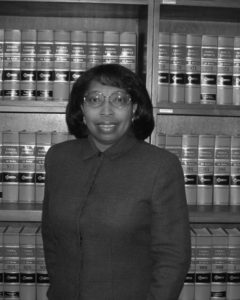 When Bernice transferred from an all-black school to Olive Branch High School in her junior year, she was the only African-American honor student invited to attend a field trip to New York. The sixth of 10 children, she knew the expense of the trip would be a hardship for her family. But her mother, Willie Bouie, assured Bernice she’d find the $200. Although Willie was a domestic worker at the time and her husband was a sharecropper, they somehow scraped together the money, and young Bernice went to New York. Today, she travels the world, but credits her mother’s determination to see her children reach their full potential as the inspiration for her own determined success.

“She’s just an incredible person,” Bernice says of her mother. “She always forced me to go beyond my comfort zone, and her persistence has paid off. Now, instead of just going to New York, I’m going halfway around the world. I really attribute it directly to her.”

The destination “halfway around the world” is Russia, where for the past three years Bernice has taught Russian women about women’s rights, the women’s movement in the U.S., and antidiscrimination laws. This year, she will do the same for women in Turkey as an advisory member on the board of the Central and Eastern European Law Initiative. Although she remains very active in local and national causes, she’s enthusiastic about her work in emerging democracies.

In 1982, Bernice became Judge Bernice Donald for the first time when she was elected to the Shelby County General Sessions Criminal Court bench, the first African-American woman to be elected judge in Tennessee. In 1988, she became the first African-American woman in the nation to be appointed as a U.S. Bankruptcy Court Judge. Finally, in January 1996, she received a lifetime appointment as a federal judge in the U.S. District Court, Western District of Tennessee – another first in the state.

Bernice didn’t grow up planning to become a judge, or even an attorney. As a young girl, she would gather her dolls and those of her sisters and line them up against the bedroom wall. She would “teach” the assembled “students” by reading to them from the encyclopedia. As she grew older she aspired to become a teacher. Again, it was her mother who intervened. Willie insisted that young Bernice go to college, but told her she should reconsider her plans to become a teacher. Still, Bernice has been teaching in one fashion or another since 1980 as an adjunct professor at the former Shelby State Community College, the University of Memphis and the National Judicial College.

On December 1, 2010, Bernice Donald was nominated by President Barack Obama for a judgeship on the United States Court of Appeals for the Sixth Circuit. She received her commission on September 8, 2011 and continues to serve as a judge on the court.