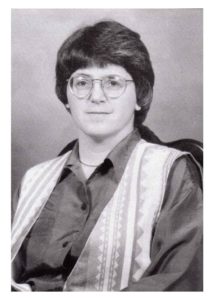 Long before domestic violence became a hot issue in the Tennessee Legislature, Angie D’Agastino was working throughout the community to furnish services desperately needed by women and children who had no place to turn.

In 1976 she began as a volunteer answering crisis-line phones, which were operative for only five hours per day. She then became coordinator of the Committee on Spouse Abuse, testified before legislative committees and organized lobbying efforts.

As program director of the YWCA, she has worked through the new media to educate the community on domestic violence, and has designed and conducted workshops to garner support for spouse abuse services. She has trained staff and volunteers to counsel and assist clients and has worked withy other organizations and agencies who provide help. Angie also manages the shelter facilities at the YWCA.

Angie’s pioneering work has been instrumental in providing these services and solving glaring problems in spite of active opposition from organizations and individuals who believe that such services are destructive to the family unit.

Since leaving the YWCA in 1988, Angie has continued to direct her energies toward issues that others are reluctant to address. As executive director of the Aid to End AIDS Committee from 1989 to 1992, Angie worked with people living with AIDS to provide direct services and to raise community awareness about AIDS. She became a supervisor at Case Management, Inc., working with the chronically mentally ill to ensure that they are treated with dignity and respect, and that they are not isolated from our larger community.