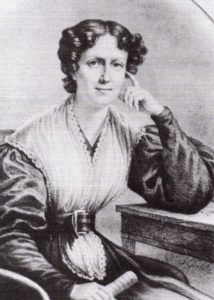 Frances Wright was a wealthy 30-year-old Scotswoman when she came to the Tennessee wilderness in 1825 to make a reality of her dream: “To develop all the intellectual and physical powers of all human beings without regard to sex or condition, class, race, nation or color,” as she put it.

With the advice of land speculator Andrew Jackson, who later became president of the United States, Frances bought a 2000-acre tract on the Wolf River near the frontier settlement of Memphis. She named it Nashoba. There she worked alongside former slaves whose freedom she had bought, and a handful of white colonists who shared her utopian views.

They cleared land, planted crops, constructed log buildings. From the start however Nashoba was plagued by harsh realities of climate, economics, malarial fevers and the hostility of neighbors who denounced the community as a center of “free love” and “miscegenation.”

In 1830, when it was clear that the experiment had failed, Frances Wright arranged for the resettlement of Nashoba’s entire black population to black-ruled Haiti, which had just won its independence from France.

Until her death 22 years later, this woman who was ahead of her time vigorously advocated abolition of slavery, universal public education, religious freedom and total equality of the sexes. Frances Wright remains today one of the most widely acclaimed women who ever lived in Memphis and Shelby County, Tennessee.