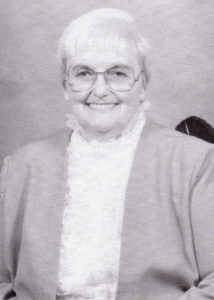 Eunice Wilson has worked tirelessly for reproductive rights. From 1988 to 1992 she served as executive director of the Memphis Center for Reproductive Health (MCRH).

She has displayed compassion towards women and girls who chose to terminate their pregnancies, as well as unimpeachable tact in dealing with anti-choice picketers and the local news media. She has met with anti-choice leaders to share her convictions and to try to understand theirs. She has spent many hours meeting with pro-choice groups to plan strategies for public relations, political actions and building a safe environment for Mid-South clinics. Eunice cares about the staff, volunteers and, most of all, clients at MCRH and is always encouraging and optimistic.

Eunice Wilson has a long history of caring for others. She married Willard Wilson in 1947 and over the next 13 years gave birth to six children. While the children were young the Wilsons began foster-parenting children handicapped as a result of abuse at home.

In 1960, the family moved to Humboldt, Tennessee. While continuing to care for foster children, Eunice began working nights as a nurse’s aide at a local hospital. In 1967, the family moved to Memphis where Eunice began to study nursing and was soon working at Baptist Hospital. She earned her RN at Memphis State University in 1969. Two years later, she began correspondence courses and subsequently received her Bachelor’s degree in psychology and counseling.

During this time she became charge nurse in the Baptist Hospital Emergency Room. It was work there that led Eunice to her current convictions concerning a woman’s right to a legal abortion. She saw women arriving for emergency treatment following complications from abortions done outside the state, and she questioned why women in Tennessee were unable to have safe, legal abortions. Without this experience, Eunice would have remained on the other side of the issue, instead of being the pro-choice activist that she is today.

Taking an early retirement in 1984, Eunice began part-time work with St. Peter Nursing Home. At the age of 60, she became clinic coordinator for MCRH. In 1988, she became director.

During her tenure as director she worked actively to preserve the rights of women to informed health care and a safe and legal abortion. All the while staff, clients and the clinic itself were subject to threats and abuse by anti-choice activists. Throughout it all this woman of courage remained a calm source of strength and resolve.

Eunice Wilson passed away after a battle with the results of a stroke.