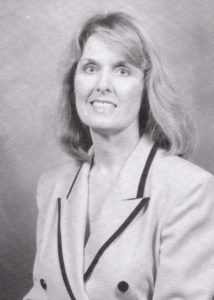 Teresa Raelene Dowdy went to work for Criminal Court Clerk J.A. “Bubba” Blackwell in 1974. The Equal Rights Amendment was being debated for ratification among the states and women were entering the workforce in record numbers. But Rae found that time had stood still in Bubba’s office.

Blackwell’s female clerks were not allowed in the courtroom because he said women should not hear language used in some trials. Men could leave early for sporting events or they could study on the job for courses they enrolled in. Men got pay raises if they married or became fathers. Yet a female clerk who wanted more time at home with her new twins was placed on part-time status with reduced pay while a male clerk who was sick for more than a year received several raises while he was off!

Although all 54 employees were technically deputy clerks, a five-level hierarchy from chief clerk to deputy clerk had been devised, with 49 different salaries. Guess who fell into the lowest-paying levels? Guess who was passed over for promotions and pay raises for years, simply because she was female? Guess who finally got mad and got a lawyer?

In November 1985, Rae and 13 other female clerks filed suit in federal court against Blackwell, Shelby County government and the County Commission. Represented by the U.S. Equal Employment Opportunity Commission, they charged sex discrimination. During the two-year wait for trial Rae’s employer saw to it that each day was as difficult as possible. Rae was verbally abused, constantly watched, denied her vacation time, questioned about her sick leave. They even tried to take away her parking space. Many fellow employees turned against her and tried to convince others to do the same.

In court before U.S. District Judge Julia S. Gibbons in February 1988, Blackwell testified that he paid men more because of their physical abilities and because they have families to support. Judge Gibbons found that lowest paid males earned more than the highest paid females. Such facts brought her to the conclusion this was “convincing evidence of unequal pay.” In September 1988, Gibbons ruled there was “willful” discrimination. She ordered the county to pay $445,000 to the women, including double back pay for three years. The judge also ordered raises for the women equal that of men performing the same duties — up to $400 a month in some cases. The county did not appeal, and Blackwell chose not to seek re-election in 1990.

Rae Dowdy stood up for herself, her female co-workers and every wage-earning American woman. She fought for equal rights and proved that that fight can be won, with courage.