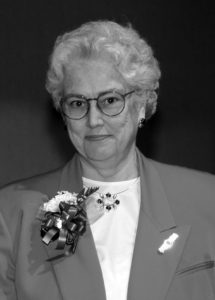 Perre MacFarland Magness has used her passion for history and her skill as a writer to document the essential roles women have played in the life and times of Memphis and the Mid-south.

Some little-known, some legendary, all fascinating, the women’s stories were part of Perre’s 16-year collection of area history for a weekly column in The Commercial Appeal called “Past Times.”

Those columns, written from 1987 to 2003, were inspiration for several Women of Achievement Heritage nominations and awards through the years and were compiled in 1994 in one of Perre’s six books, called Past Times: Stories of Early Memphis.

This devotion to history began for Perre during a childhood spent in Columbia, Tennessee, in a home built in 1854. It deepened as a student at Vassar College, where, she says, “the general emphasis was that women could do anything,” and during graduate studies at Vanderbilt University.

She wrote book reviews for the Nashville Banner’s well-respected book editor, Mary Douglas. “I graduated the year Bette Friedan’s book (The Feminine Mystique) was published. Miss Mary knew I was literary…She gave me all these books about women having nervous breakdowns, being so unhappy. It’s amazing that a) I ever married and b) that I ever read anything else.”

She did marry in 1965 and moved west with what she called her “liberal eastern education…I came to Memphis young and serious and liberal and I got involved in community things…volunteer work.”

Indeed she did. Even with two young children at home, Perre founded the Volunteer Center of Memphis – which recently celebrated its 30th anniversary – as chair of a Memphis Junior League committee. She went on to become president of the Junior League and in 1980, she earned Leadership Memphis’s Kate Gooch Award for service to the community.

She also had been writing book reviews for The Commercial Appeal after being advised to be careful “not to come on too strong” in a meeting with editors. “Come off like an intellectual housewife,” Perre was told in 1967.

So with that experience, friends in the Junior League turned to her as they attempted to get a book produced on local architecture. That project became Perre’s first book, Good Abode, Nineteenth Century Architecture in Memphis and Shelby County. And that book led Perre to her real life’s work. After Good Abode, The Commercial Appeal called and asked Perre to write a local history column every week. She agreed and “Past Times” was launched. “I am very lucky in that I found just what I love to do in my 40s,” she says.

Her second book – a how-to on cookbook publishing – appeared in 1986 followed by A History of Idlewild Presbyterian Church in 1990.

Along the way, she continued to serve community arts and civic boards, including 12 years as trustee at LeMoyne Owen College and as the first woman on the Board of Visitors of the University of Memphis in 1992! Among her accolades is the Memphis Historical Writing award in 2002 for her book, In the Shadows of the Elms: Elmwood Cemetery.

Just this year, Perre became one of four female members of the Egyptians, a venerable Memphis private club dedicated to intelligent discourse.

Perre Magness recognized the need to preserve the stories of women whose courage, talents and achievements helped shape the Mid-South region. Her work leaves a priceless legacy for future generations.