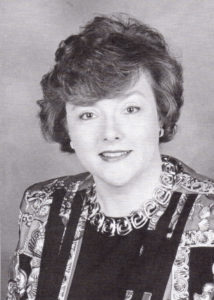 Karen Williams, a native Memphian, took her University of Arkansas music degree to Memphis State University where she earned a law degree in 1976. She then practiced law in the city’s first all-female firm — Coleman, Sorak and Williams. Drawn to politics, in 1982 she defeated an incumbent to win a seat in the house of the Tennessee General Assembly. In her nine years in Nashville, Karen has become known as the most consistent friend for women in the legislature.

She won her seat by building a coalition and she used those same skills to pass legislation to fund shelters for battered women and their children. This was not a popular cause because it would increase the marriage license fee for funding, and it was not restrictive in defining battered women. She faced active, persistent and well-financed opposition. Even so, she did not give up and finally gained passage of the legislation.

Karen then co-authored and led the battle for passage of the maternity leave bill, which requires businesses employing at least 100 people to provide four-month pregnancy leave, putting Tennessee at the forefront of the 50 states on that issue. She also visibly supported the Child Support Enforcement Act, guarding victims’ rights and insurance coverage for special counseling services.

This year she is trying again to extend the parental leave rights to adoptive parents and to address insurance needs of adoptive children. She also is supporting legislation requiring state-funded mammography equipment be kept in good working order and that technicians be well trained.

Karen Williams is a visionary, but not as defined by Webster. Rather, she is a doer who inspires others to join in the effort to meet the needs of women. As she entered this year’s legislative session, Rep. Williams summed up her guiding philosophy: “What we do affects people’s lives and we ought to be cognizant of that every minute.”