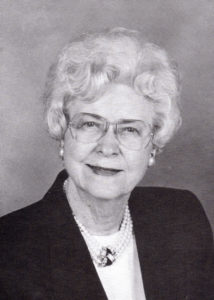 Verla Petit has devoted her life to service to the downtrodden, the forgotten and the rejected at Memphis Union Mission. She has given 35 years — first, as executive secretary, and since 1976 as director — to provide food, shelter and rehabilitation for men and women she calls “down-and-outers.”

Nearly from the day in 1951 when she entered the mission as bookkeeper and secretary to its founder Jimmy Stroud, she was involved in decision-making and administration for the mission’s programs. She is the founder and director of the Memphis Christian Servicemen’s Center and the 80-acre Victory Valley Bible Conference Grounds, both operated by the mission. She is a frequent speaker at Bible conferences and outreach programs.

Verla has worked in steadfast devotion to her God, firm in her belief that needs of the down-and-outers remain unchanged. She has said, “We take those that the police bring us, or the hospitals call about. We take those that left home, got on a bender and have drunk up every cent they have. We take them out of the bus station.”

Even before her involvement with the Union Mission, Verla taught Bible classes at the Strand Theatre, started a Tuesday night Bible class at Second and Madison, and made Sunday visits to Mud Island squatter homes. As one nominator said of Verla Petit, “If she was a woman in industry, she’d be running the company!”

Verla retired in July 1991 and travels frequently as a spiritual and inspirational speaker.