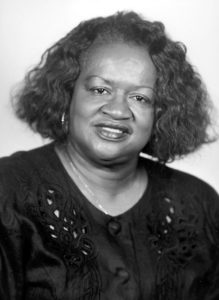 Throughout Hazel Moore’s life, the need to express beauty both inside and out has guided her initiative. Remember sea-grass dolls? Well, Hazel does. From the time she was old enough to walk, she carried a soft-drink bottle with sisal attached for hair. Hazel’s hands braided, curled, parted, plaited and ponytailed anything that stood still long enough for her to do so. Long after other girls had put away their dolls, Hazel Moore was still shaping “hair life” out of every female relative in her vicinity.

Her hands found more to do. Hazel Moore’s family felt that she should become a nurse but Hazel felt otherwise. Instead she completed cosmetology college and became a licensed instructor. She had a lucrative practice at The Peabody Hotel, moved to Goldsmith’s and then on to another shop, but she wanted more. In 1973, she opened her first shop in Whitehaven. A second shop followed in 1984. Organizer of the first Tennessee Beautician’s Trade Show, Hazel has a loyal customer base. Mothers, daughters and now granddaughters come to her for the latest and best in hair fashions.

With her husband Jayne and their four daughters at the center of her life, Hazel Moore found still more work for her hands to do, this time in her community. And a grateful community has bestowed a bevy of unofficial titles including “Mayor of Whitehaven.”

She’s provided hands-on leadership in combating drugs, teen pregnancy and illiteracy. And she’s used her talents to promote community pride, encouraging citizens to participate and have fun. The Whitehaven Holiday Festival and the Community Health Fair are good examples.

A highly regarded speaker, Hazel was once asked by students after one of her talks, “Why can’t we have more things like this?” She responded, “You can!” So in 1993 she founded the Academy of Youth Empowerment. The organization works to help teens develop social skills, manage stress, and improve study habits, a Hazel Moore recipe for success.

Her hands have led to so many accomplishments and awards that a complete list would fill volumes. Some that best exemplify the handiwork of Hazel Moore include the Pioneer Memphis Business Award (1996), the American Heart Association Outstanding Volunteer Award (1998, 2001), the Black Business Association’s Benny Award (2002) and past presidency of the Friends of Whitehaven Branch Library.