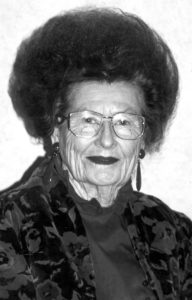 “I consider myself an inventor,” says internationally acclaimed rock ’n’ roll guitarist Cordell Jackson. “I’m just richly blessed with ideas … I have now more than ever. If I think of it, I do it.” Initiative has been the driving force behind this colorful music pioneer since her childhood in Pontotoc, Mississippi. Inspired by her musical father, Cordell began learning at age 12 to play piano, bass, mandolin, banjo, harmonica and the guitar. “When I picked up the guitar, I could see it in their eyes, ‘Little girls don’t play guitar,’ they thought. I looked right at ’em and said, ‘I do.’”

And play she did. In 1943, she graduated from high school and moved to Memphis. In 1946, she purchased her own recording equipment. During this same period of time she met and married William Jackson Jr. and went on to become the country’s first female recording engineer. She was the first woman to write, sing, accompany, record, engineer, produce and manufacture her first record. Cordell also became one
of the first women to start her own record label, Moon Records, in 1956.

During the next few decades, Cordell continued to pursue her love of music and to distribute her Moon Records products to 48 states and 35 countries. One night during the 1960s, Cordell was in the audience at a fundraiser where Alex Chilton and Tav Falco were playing. To Cordell’s surprise, they were playing her music instrumentally. When Falco later told her it was “new wave from London,” she informed him it was hers and invited him to hear her recordings.

But it was writer-producer Celia McRee who truly cast the spotlight on Cordell. In 1985, Celia brought Cordell to New York for the New Music Seminar. While there, she joined old friend Tav Falco on stage at the Lone Star Club. “I started playing, and they stood up in one swoop, like a gust of wind,” says Cordell. History was being made again, and Cordell was a star.

Soon after, Cordell had an award-winning video in the New York Film Festival and on MTV, and then was featured in New York’s Interview magazine. And things haven’t slowed down. She’s been named Memphis Musician of the Year, Memphis Songwriter of the Year, honored by Who’s Who of World Women, and been included in the Smithsonian Institution, the Rock ’n’ Soul Museum in Memphis, and the Rock and Roll Hall of Fame in Cleveland.

Cordell also has made numerous television appearances, including 1992’s award-winning Budweiser commercial with famed guitarist Brian Setzer. She’s currently writing a book, The Brighter Sides and My Music, and recently completed work on a movie, Wayne County Rambling, which will feature one of her songs, “Jazz Fried.” In addition to her ongoing recording career, she found new success as an accomplished artist and has sold paintings to collectors in London, Japan, Stockholm and across the U.S. In Memphis, her work can be seen in Jay Etkins’ Gallery.