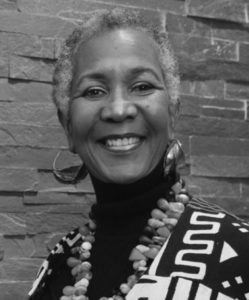 In 1982, Bennetta Nelson West used her education in business management, her long-standing interest and participation in the arts, and her passion and understanding of the local African American art community to found the Memphis Black Arts Alliance, the city’s first regional arts and cultural organization which celebrates and nurtures artistic excellence and black heritage.

Born in the John Gaston Colored Wing Hospital in the 1940s, the only child of parents she describes as teachers, philosophers and entrepreneurs, Bennetta Nelson West knows a thing or two about racism and sexism. As a Girl Scout, Bennie, as she is known, and the rest of her troop were only able to enter through the front door of Girl Scout Headquarters, then located on Union Avenue, because the troop leader Mrs. Arvon Thigpen could pass for white. After graduation from mighty Melrose, she attended Tuskegee Institute. She wanted to own a hotel and restaurant but was told by a professor, “nobody’s going to let a colored woman do that. You should become a dietitian, work in a hospital and marry a doctor.” So she wasn’t admitted to that program her first year.

Determined to get in and against her mother’s wishes but with her father’s support, she came home and started as a “salad girl” at the old Chisca Plaza Hotel Restaurant downtown and ended up as its first Black waitress. With a letter from the Chisca’s owner, she was finally admitted to the program of her choice and graduated with a degree in Institutional Management & Foods & Nutrition. In her first professional job as a dietitian at St. Joseph’s Hospital in Memphis, she was only allowed to work with black patients.

She married and moved to California. Her husband didn’t want her to work. According to Bennie, he only wanted a “trophy wife,” but that didn’t stop her. She got a job anyway, in the Food Services Department of Disneyland. After orientation she was assigned a Mammy outfit to wear in a New Orleans style restaurant. Anyone who knows Bennie won’t be surprised at what happened next. She quit.

Unhappy in marriage and not satisfied with her career, she got a National Institutes of Health Fellowship and moved to New York City to attend Columbia University to pursue a Master’s Degree. She stayed a decade.
There, between 1968 and 1978, Bennie became active in the black arts movement. She studied and participated in the theatre, dance, and visual arts industry, settling on a part-time career as a potter. Seeking to merge her arts and business interests, she received additional training in Arts Management from the New School of Social Research in New York City and the Arts Management in Community Institute through the Lila Wallace-Reader’s Digest Fund and the National Guild of Community Schools of the Arts.

Upon return to Memphis in 1978, Bennie joined the Continuing Education Department of what was then Shelby State Community College. While there she organized the First National African American Crafts Conference & Jubilee. This conference became a precursor to the National Black Arts Festival.

In 1982, while continuing as a college administrator and with the support of fellow faculty members Yvonne Robinson Jones, Patty Lechman, and 2005 Woman of Achievement for Initiative Mahaffey White, Bennie organized artists and arts groups to found the Memphis Black Arts Alliance, Inc.

Her biggest challenges included resistance from major arts funders and other emerging arts groups, disputes between artistic egos and struggles across disciplines. As is the case with many women, balancing family and work was also an issue.

Since its beginning, the Memphis Black Arts Alliance has created a venue for the development and showcasing of local and nationally recognized black artists. MBAA has employed more than 300 local artists and provided over 3,000 youth, families and adults the opportunity to learn, master and showcase the rudiments of the arts with well-trained, dedicated and culturally inspired artists.

This year Memphis Black Arts Alliance, Inc. is entering its 34th year. And Bennetta Nelson West has just recently retired and passed the baton. Under new leadership, MBBA continues to grow and thrive, a very significant achievement in the life of an organization founded on one individual’s dream and drive.

For this, we applaud and honor Bennetta Nelson West for her initiative.