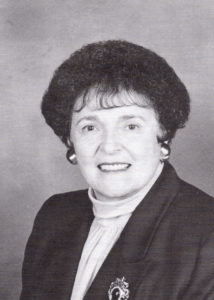 Nina Katz is a survivor of the Holocaust and as such has spent her life working with special insight to combat racism, sexism and anti-Semitism. She shares her experiences during World War II with students across Memphis and Shelby County in the hopes that such tragic events will never again occur.

Nina has devoted 12 years striving to end illiteracy and the poverty that plagues non-reading adults. Her work is respected and honored nationally for her creative service to the cause of literacy.

In her own eloquent words, “As an eye witness to the European catastrophe, I came to realize at a very young age the importance of human survival. My love for humanity has been expressed through a strong feeling of commitment and deep dedication to my work in this community.”

Nina served as first female board chairperson for the Memphis Chapter of the National Conference of Christians and Jews. As a leader in Jewish women’s organizations, Jewish educational and cultural institutions, her skills in developing programs to enhance brotherhood and sisterhood among people of all races and faiths have been exemplary.

Nina Katz is a singular woman of valor and heroism.

Nina Katz had a hand in founding the Memphis Literacy Council, saving Facing History and Ourselves, and Diversity Memphis. She started an interracial, interfaith women’s discussion group called Coffee and Dialogue. Nina Katz passed away on February 8, 2014 at age 89.

In 2016 Nina Katz was chosen to be one of several prominent Memphians in the public artwork, Upstanders Mural, that is near the corner of Main Street and Huling Avenue.